The absence of an envelope and the lack of names within the letter itself makes identifying the author and his brother extremely difficult. The author’s signature appears to read, T. G. Rowan. We learn from the letter that the author has been in California for some time but he has finally given up mining for farming. He has relocated to the rich farm region near Watsonville in Santa Cruz County. He is not married and claims that the years have not been kind to him; he is prematurely gray and looks to be 50 years old. My guess is that he is in his early 30s — perhaps a Civil War veteran.

The author has written to his brother in Michigan who we learn is married. It seems the brothers may have grown up in the vicinity of Albany, New York, as there is a reference to old friends there. Most likely the parents of the brothers, however, are dead as they are not mentioned in this letter.

I once more sit down to answer your kind letter which came to hand & was duly rec’d & it found me well. I was happy to hear from you once more. I had almost given up ever hearing from you any more but I recon you have not quite forgotten me. I am trying ranching some this winter but I think I will make a poor out of it. Crops look awful bad. We have had one of the worst winters I ever experienced in the state. Rain all of the time. The whole of the country has been under water all winter but we are a having a few days of fine weather now & I hope it will continue fine for I am getting disgusted.

I think I will come out behind on my farming this year but I have given up the mines. I tried them until I was satisfied of them. I did think last fall that I would come home this spring but I don’t know when I will come now. I have got down in this ___ country. I am one hundred miles from San Francisco near Monterey. I am stopping in Pathsoe Valley. I like it here very well so far. It is a pretty valley.

I haven’t heard from Albany for a long time. I don’t know what is the matter. The last letter I got they said John lay at the point of death. I am very anxious to hear from there. It makes me feel sad to be so far from my friends & to hear of their deaths but why should we mourn. A few years more & we must follow them to our last resting place. We are all growing old. I don’t think you would know me. I look to be fifty. I am getting quite grey but I think it is owing to early piety, don’t you? I think I will get me a wife & settle down for the balance of my days. I wish often I could see you & your wife if but for a short time but I don’t know as that ever will be but I hope on.

I can’t think of any news to tell you. I want you to write me a long letter & tell me all of the news & how you like Michigan. You didn’t tell me how to direct so I don’t know if you will ever get this. If you do, answer immediately. I want you to send me your photographs & I will do the same token. I hope this will find you all well & doing well. I will close by bidding you good bye. 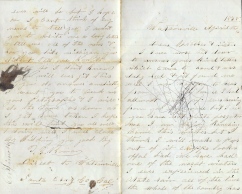