This letter was written by George Frederick Wright (1824-1880), a portrait artist who worked in Hartford, Connecticut and Springfield, Illinois. He received a classical education and later studied at the National Academy Museum & School of Fine Arts in New York as well as with portraiture masters in Germany and Italy. His reputation as a portrait artist resulted in him serving as the portrait artist for several Illinois and Connecticut governors.

Wright’s most famous portraits, however, are of Abraham Lincoln. It is said that after Lincoln was elected to the Presidency, he was besieged by artists who wished him to sit for a portrait. Not having time to sit for all, Lincoln agreed to sit in the Old Legislative Hall in Springfield for a few hours every morning for any and all artists who wanted to paint him. Wright was among the “group of free-for-all” painters who painted Lincoln at that time. Wright’s portrait was so satisfactory to Lincoln that he actually purchased the portrait and later gifted it to Baker — a close family friend. The painting is now in the Illinois Historical Society. [Note: Several websites record Wright’s lifespan as 1828-1881, which I believe is an error.]

Delia and Eugene B. Payne were married on 26 January 1862 in Osage, Mitchell County, Iowa. Prior to her marriage, Delia was a school teacher in Stillwater, Iowa.

According to the New York Times, April 8, 1910, Payne was born in Seneca Falls, N.Y. on April 15, 1835. But in 1836 his family, led by his father, Thomas Hubbard Payne, bought land in northwest Fremont Township, Lake County Illinois (1885 Lake County, Illinois plat book). The large Payne family played crucial political and economic roles in the development of Lake County, as described in John J. Halsey’s 1912 History of Lake County, Illinois (Waukegan, 1912, 432-51). As the son of a pioneer family, Payne studied in local schools and graduated from the Waukegan High School (Open Library undocumented online article on General Payne). In 1860 he was graduated from the law school of Northwestern University, a member of the first class, and was “admitted to the bar that same year,” according to the Times obituary. 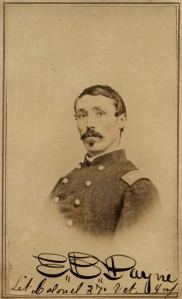 At the beginning of the Civil War he organized at Waukegan, Illinois, the first company of Union infantry troops in Illinois (37th Illinois Infantry Regiment) and he served with them until September of 1864 when he was discharged due to his debilitating malaria (background note, Payne collection, Clements Library, U. of Michigan). That fall of 1864 he was elected to the Illinois state legislature (Halsey, p. 155). This group of letters at Lake Forest deals with Payne’s early service and with his role as a participant in and witness to the crucial Battle of Pea Ridge (Arkansas), which prevented the Confederacy from taking Missouri and St. Louis. In 1903 he spoke about this encounter to the Loyal Legion, and this address was later published as a pamphlet.

Payne was wounded and ill following his participation in the July 1863 Vicksburg campaign and victory. His service after the spring of 1862 is documented in the Payne collection at the Clements Library, U. of Michigan. The background note for that collection states that Payne thought that the December 1862 Prairie Grove battle as equally significant to that at Pea Ridge. By the end of the war, and after playing a role in an important Rio Grande campaign and returning in early 1864 to Illinois to recruit, he was mustered out in September 1864 at the rank of Brigadier General. He was the first soldier from Lake County, Illinois to achieve the rank of general. [Source: Lake Forest College Archives & Special Collections]

I returned last evening from St. Louis whither I had been for a few days in company with the State Officers Hon. J. K. Dubois,¹ Hon. William Butler,² Hatch,³ and the representative of the Executive Department. We had a merry time, I assure you, and what is more memorable, our hotel bills were all accepted. ‘Twas free of cost. I find a letter from you lying in the office containing among several other interesting items one that strikes me as a little singular and that is that I was indebted to you for thirty dollars of the money I had of Gustavus. Singular was much as this is the third version I have had of that financial transaction. Had I known that the money or any part of it came from you, I should have paid it long ago, but thinking Gustavus would in these times prefer to have it drawing interest than to have it paid I have let it by. Since I received the $50 from Gustavus, I have never heard one word from him about it. But the three statements I refer to are these. Gustavus wrote me at first “that with great difficulty and some _____, he has succeeded in getting together the $50. Subsequently mother writes me that $5 of the money belonged to her and in paying it I need only repay the remaining forty-five. Now you come in with your statement which together with mothers leaves only $15 due Gustavus. How is this? Please explain. I think a fourth version is necessary to a clear understanding of the case. How but so far as I am concerned, it matters not to whom the money is due. I am ready and have been at any and all times to pay it. It is very kind of you to say I need not pay the thirty dollars but I cannot accept of your offer. You owe me nothing and the thirty dollars shall at some future time be returned to you with at least the interest with grateful acknowledgement of your kindness and delicacy in contributing it to my need at the time you did. I am very sorry i did not know how this matter was before for I should have treated the matter very differently had I not supposed it was a clear business transaction with one person.

I received a letter this P. M. from mother. She continues very cheerful.

So Kitty has a little dog, eh? Tell Kitty you must bring him up & know ____ much of wisdom and good manners that he won’t bite me when I come to see you. What has become of Mrs. Haines and what does he think of the extra session?

Remember me kindly to Maj. Payne; also to Melinda, Mr. H. and the children.

¹ Jesse K. Dubois (1811-1876) “met Abraham Lincoln when they served together in the State Legislature in the 1830s and early 1840s. Lincoln helped persuade Dubois, then the state’s youngest legislator, to vote for moving the state capital from Vandalia to Springfield. ‘He made Webb and me vote for the removal though we belonged to the southern end of the State. We defended our vote before our constituents by saying that necessity would ultimately force the seat of government to a central position. But, in reality, we gave the vote to Lincoln because we liked him, because we wanted to oblige our friend, and because we recognized him as our leader.’ Dubois was a conservative from southern Illinois who served four legislative terms with Mr. Lincoln. He was, however, a reluctant convert to the Republican Party in 1856. He was one of just two delegates to the Bloomington organizing convention from the lower part of Illinois. But Mr. Lincoln’s speech to the convention turned Dubois into a true believer. ‘Whitney,’ Dubois said to attorney Henry Clay Whitney as the convention broke up, ‘that is the greatest speech ever made in Illinois and it puts Lincoln on the track for the President.’ “Uncle Jesse.” grew closer to Mr. Lincoln during the 1850s. He became State Auditor in 1857 and served until 1864. In 1857, “Uncle Jesse” bought a house a few doors down the street from Mr. Lincoln’s home on Eighth Street in Springfield and became a regular visitor to the Lincoln household.

² William Butler (1797-18xx) was employed as a young man in the iron works of Tennessee, and after that was deputy of the Circuit Clerk for Adair county, Kentucky. While there he made the acquaintance of Stephen T. Logan, then a young lawyer. After spending time employed as a clerk on a steamboat, he came to Sangamon county in 1828 and purchased a farm in Island Grove. He later came to Springfield, and was soon appointed Clerk of the Circuit Court, by his friend, Judge Logan, March 19, 1836, and resigned March 22, 1841. He was appointed, by Gov. Bissell, State Treasurer, August 29, 1859, to fill the vacancy occasioned by the resignation of State Treasurer Miller. He was elected to the same office in 1860 for two years. 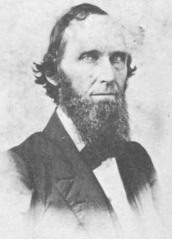 ³ Ozias M. Hatch (1814-1893) was the Secretary of State in Illinois and a close personal friend of President Abraham Lincoln. He accompanied Lincoln to the Antietam battlefield to meet with General McClellan after the battle. Dismayed that McClellan would not more aggressively pursue Lee’s defeated army into Virginia, it was Hatch that Lincoln is supposed to have confided his frustration and to whom he comically called the Army of the Potomac as McClellan’s personal body guard.

† Elijah M. Haines (1822-1881) was elected to the Illinois House of Representatives in 1859 and served eight terms, serving as Speaker of the House during 2 of them. He became a resident in Waukegan in 1852. He was married to Melinda Griswold, daughter of Amos Wright making them relatives of George and Delia’s.