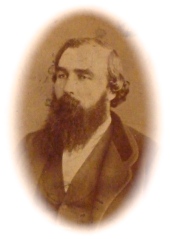 This collection of Civil War era letters written by the Phillips Family include three by Rev. Clark C. Phillips (1822-1908) and one by Augustus C. Phillips (1817-1909). All three of the letters were addressed to their brother, A. L. D. Phillips. Family genealogy records do not show any brother with initials of “A. L. D.” although there is a Lee A. D. Phillips (1829-1914) and an Abel L. Phillips (1813-1894). Most likely it was the former who was known to have relocated from Ohio back to his father’s farm in Russell, Warren County, Pennsylvania, where I believe all three of these letters must have been addressed (no envelopes).

Augustus was married to Sarah Worden Brown (1819-Aft1860). Their eldest son was Edwin Ross Phillips (1839-Aft1920) who enlisted in Co. E, 48th Ohio Infantry Regiment in September 1861. Ross was mustered out of the service in July 1865. At the time Augustus wrote his letter in March 1863, the 48th Ohio was positioned near Vicksburg, Mississippi. In 1850, Augustus and Sarah resided in Pleasant, Switzerland County, Indiana. By 1860, they had relocated to Troy, Miami County, Ohio — less than 5 miles from West Milton, where the March 1863 letter was datelined. We learn from this letter that Augustus shared a hatred of copperheads with his brother whom he accused of cowardice and blamed for prolonging the war.

Clark was a minister in the Christian Church. He was married to Mary Platt (1810-1888) in 1845. In 1850, Clark and Mary resided in Cotton, Switzerland County, Indiana. In 1860, they resided in Perryton, Mercer County, Illinois — 15 miles south of Davenport, Iowa. Family records state that Clark served as chaplain to the 23rd and 29th Iowa Infantries during the Civil War. By 1870, they had relocated to Yellow Springs, Greene County, Ohio. Clark makes mention of his two children in his letters: Mary Nancy Phillips (1847-1937) and Oliver Barr Phillips (1849-1896).

I once more seat myself to write you a few lines in answer to yours of the 22 ult. which came safely to hand and was read with pleasure. It was as news from the dead and I felt that the dead was alive and the lost was found. I immediately wrote a letter to Augustus but have not yet received an answer from him. I am anxious to hear from him and his and Elisha’s family. I wrote an epistle of enquiry and you did well in answering the many enquiries I made but there are many more I would be glad to have answered which I neglected to ask in my letter, some of which I was not prepared to ask in that letter.

You wrote me that you had four children &c. Now if I had ever heard of your being married I had entirely forgotten it which will be a sufficient excuse for not writing you anything on that subject. Whom did you marry? Was I acquainted with her? Where did she live, &c.?

You wrote me that you were living in sight of our old home &c. Do you live on the old farm? If so, on what part of it? Do you own it and how much? What is it worth and how are you getting along in the world? How are the rest of the boys getting along? Are they steady, sober men &c.? I want all the particulars. I gave you something of a description of our country and would be glad to give you a full description of the country but if I should undertake I should fail and you would be like the Queen of Sheba — you could not and would not understand and believe there is such a country until you have seen it for yourself and then you will declare the half has never been told. I want you to come out and see the country for yourself.

I would like to know how you all feel on the war question — whether you are all for the Union now and forever or whether there are any who sympathize with the rebellion finally. Write everything that you can think of that you think I would like to know. We want to see you all very much. I should indeed be very happy to step over and see those little fellows that you say are so handsome, not that I doubt their beauty in the least. How could I (it being characteristic of the family). It may be they resemble their uncle that lives out west and thus there could be no question as to their beauty. Mary send her love to you and yours and says she would like to see you and take that pinch of snuff.

Mary and Oliver send their love to you. Give my love to all enquiring friends. Remember me especially to my mother. I remain as ever your affectionate brother, — C. C. Phillips

Yours of the 7th was received the 14th inst. but owing to my hurry in the ______ ______, I have deferred writing until now. We are in usual health. I have made up my mind to move towards the Ohio River this spring. I may go to the same place where you saw us last. The man wants me to come back and if I can get ____ dollars a week, I will go there. My health was not the best in Butler County but better for than in Miami. After having a hard time of sickness in one place, almost any place looks pleasant by the side of it. I will tell you more about it another day.

I received a letter from Ross last night. He is just above Vicksburg. He says he has tolerable health. Their company is greatly reduced by sickness and death. Only eight privates, 3 corporals, & 1 sergeant reports for duty. Their regiment does not number more than their company did when they left Camp Deizen [Dennison] but he says the best feeling possible prevails. They have all got acquainted with each other and agree like brothers. I don’t think if the war lasts the three years that there will be five men left out of the one hundred that left our town.

I hope the draft may be hurried along and not only take five hundred thousand, but a full million and dry up the rebellion at once. I want these peace democrats to have a fair chance to make an honorable peace by fighting for it. Won’t it be delightful to see the poor damned sneaking crouching creeping traitorous sons of bitches that have stayed at home to fight the government and give aid and comfort to the South compelled to go and face the bullets they have helped the South to. Their arms is red with the blood of the loyal soldiers and their hearts are black with treason. All they want is to try to unite their old party that brought on the rebellion and control the destinies of a country we defend with our blood.

May God begin now to damn all such damned rascals. They have done us more damage [and] have been the cause of more bloodshed than the entire southern army. They say they will resist the draft. We shall see. If they had the nerve to fight, they would have went south and tried to maintain their cause. When the draft begins to be enforced, the bushes will be filled with butternuts and all the crevices in the rocks will be filled with copperheads as well is filled with southron confederates till their asses hang out at every loophole.

I once more take my pen in hand to write you a few lines to let you know that we are in th land and among the living and are enjoying the common blessings of life. Since I have heard from you we have passed through some trying scenes. We had some severe sickness. I have been laid up nearly all the time for the last year with rheumatism. I am now able to go about but never expect to be able to work much. otherwise we are well at present. 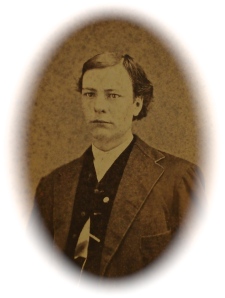 Mary and Oliver are going to the high school in this place, are doing well, [and] are getting to be tolerable scholars. Produce of every kind is high. Corn is one dollar, wheat 2 dollars, oats 75 cts, potatoes there is none. Apples none. Pork ten dollars per cwt on foot, beef from 7 to 9 cts. per pound and everything else in proportion.

The result of the election is very satisfactory. I am happy to say that it passed off quietly and resulted in cleaning out the copperhead clan from our state. They are now dead and buried — buried face downward and written upon their back no resurrection. I do not envy them their situations at present — the enemies of their country. They are despised by man, hated by God, cast out by angels, and loved only by the old serpent — the father of all snakes. I am truly happy to know that but few of my friends belong to the snake family. Just think what a curse they are bringing upon their posterity. Only think they will be told that their fathers were rebels, was butternuts, or copperheads. Suppose it were possible for one of them to return to this world twenty or thirty years hence on the fourth day of July — the people having assembled to celebrate the anniversary on that occasion — where would he find his grandchildren? The could not participate. Why? Because their grandfather was a traitor or copperhead. Verily the iniquities of the parents is visited upon the children to the third and fourth generation. God have mercy upon them if there be any mercy for sinners.

You will please write all news. How our friends are getting along, all about he family and finally, everything that you think would be of interest to me. Mary and the children send their love to you and yours. I must close by subscribing myself as ever your affectionate brother, — C. C. Phillips

…By reading your letter, I discover that I had forgotten a part of it. I discover that you are quite a politician. You state that the copperheads are afraid that [President] Johnson will be harder on them than Lincoln would have been. I hope they are not mistaken. I hope they will be held to the line and strictly brought to an account for their treason and every traitor either hung or banished from the land. I mean the Leaders of the rebellion, the Leaders of the conspiracy to murder the President, and the Leaders of the Knights of the Golden Circle or Sons of Liberty. I am in hopes the present President will faithfully perform his duty in the reconstruction of the union, that slavery shall have no fears [?] or place in the government from this time and forever.

I must now close once more by wishing goodbye, hoping to hear from you again soon. — C. C. Phillips 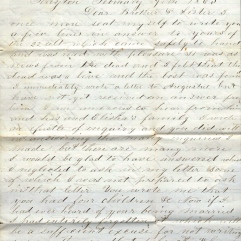 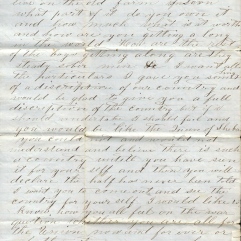 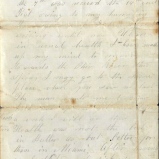 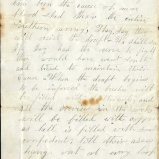 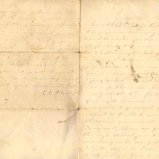 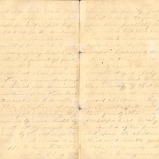 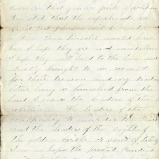 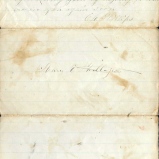