This letter was written by William E. Gould (1823-19xx), a merchant and Trial Justice in Milo, Maine. He wrote the letter to Thomas Rider Kingsbury, the post master in Bradford, Maine.

Thomas Rider Kingsbury was born in Brewer in 1817 and came to Bradford with his father when three years old, where he received a common school education and also attended school at the Charleston Academy. During the early part of his life he followed farming. In 1843 he entered into the mercantile business in Bradford. He held the office of Selectman of Bradford fifteen years, of Town Treasurer twelve years. School Committee several years, Town Agent five years, and Collector of Taxes two years. He also represented his class in the Legislature one year, and in 1869 and 1870 was elected to the State Senate. In politics he was originally a Democrat, until 1861, when he became a Republican. He was twice married. His first wife was Mary S. Dean, a native of Hampden. She died August 6, 1844. He then married Amanda L. Clark, a native of Atkinson. He was appointed postmaster during the administration of Franklin Pierce (1853), and held the office for many years.

The subject of this letter concerns the business affairs of John Dyer who we learn has been an inmate at the Maine Insane Asylum in Augusta, Maine, where he received treatment by Dr. Harlow [see footnote]. Enclosed is a letter that was written by John Dyer to Thomas Kingsbury directing him to manage some of his business affairs in Bradford.

A family history claims that John Dyer “worked as a shoemaker” when he moved to Bradford, Maine, which is consistent with the text of this letter.  His three sons were Daniel C. Dyer (1843-1862), John Walen Dyer (1846-1930), and Nathan Goodrich Dyer (1848-1927). These are no doubt the sons that John asks Thomas to clothe and send to school but not to give them money lest they “squander” it. These boys must have learned something about shoe and boot making from their father for family tradition has it that John W. enlisted in the Federal Army at age 16 wearing a pair of boots of his own making that raised his height to the minimum required for a soldier. He survived the war but saw his older brother Daniel die from wounds received at the Battle of Gaines Mill in 1862.

The reasons for placing Dyer in the state asylum are not revealed in this letter. It is noted, however, that John Dyer’s “house, barn and shed” were completely destroyed by a fire on the night of 21 August 1857 along with 20 tons of hay and some lumber. His loss was estimated at $800 and he had no insurance. [Source: Lowell Daily Citizen and News, 3 September 1857] Perhaps this loss contributed to his mental instability.

We received a letter from Dr. [Henry Mills] Harlow ¹ of the Insane Hospital. He informs us that Mr. Dyer is doing remarkably well; that he is improving physically and appears to be going on to a full recovery. He also enclosed us a letter from Mr. Dyer to you. Mr. Dyer seems to have full confidence in you and is willing and anxious for you to manage his affairs. It seems you know more of his business than any person except himself. We also have full confidence in you and would like to have you manage for him. We have been calculating to have a Guardian appointed for him but if you will take the matter into your hands and see to the affairs as he wishes you to, we think it would be useless to go the expense of having a Guardian appointed. According to present appearances, he will not be obliged to stay at Augusta a very long time.

(I enclose Mr. Dyer’s letter to you.)

By permission, I drop you a few lines to let you know how I get along. I am done well. I think I have taken medicine three times a day since I have been here and I can eat my lonesome every time and sleep very well now. Dr. Harlow is a very fine man and the under officer. They treat all of the patients very kind. Everything is neat and clean, good food, and enough of it. I have no reason to complain of my treatment hear at all. They do, I think, all they can for me. I think I am satisfied with my treatment here and I think everyone ought to be that is here. There are some hard cases here, I can tell.

I don’t borrow any trouble about my affairs as long as you have the care of them. Keep that to yourself. Tell Mr. Plummer if you please that he can have that money longer if he wants. I think it is due the 12 of next month. There is one note due of $30. If Brooks in ____ ____ better pay if he can. I want you to see to the bills and pay Mr. E. P. Baldwin. ² You will find the bills in the desk. See to all the things you and I see to ours when we met. There is some bills that people are poor widows. I don’t want them pressed to pay me anyway. I told Mr. D. S. Larabee ³ that I would let him have 25 dollars. He wanted to buy some stock. If you have got any to the amount of that, let him have it if he wants some money to buy that that you have not yet let him have it. You take the money out of mine that you let him hold for stock. Mr. Herrick had one side of _____ that was not charged on the ___. I don’t want you to let the boys have money to squander away. See that they are clothed warm and go to school and behave themselves, keep out of bad company. They are about old enough to earn their living now, get a ___ it work and go to school if you can for them and we will make it right. Don’t let them go new __ ___.

I want you to see that the two small children have clothes and enough to eat on my expense but don’t exceed any ____ on my expense not any _____. See to all and we will make it all right. There was one pair of boots charged to Andrew Robinson which he paid for in leather that was not any credit. To tan the leather was $3.40 cents. I think the weight… [calculation]

I am new and I want to stay till I can back right. Yours, — John Dyer

¹ Dr. Henry Mills Harlow (1821-1893) was born in Westminster, Vermont. He graduated from the Berkshire Medical Institution in 1844. He was an assistant at the Vermont Insane Asylum before becoming superintendent of the Maine Insane Asylum where he served for 32 years.

² E. P. Baldwin was a leather dealer in Bangor, Maine, with a store at 55 West Market Square.

³ David S. Larabee (1817-1900) was a harness maker in Bradford, Maine. Dyer probably supplied him the leather for his trade. 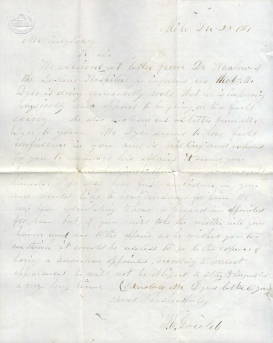