This letter was written by Col. Stephen Moore (1801-1882) of Hempstead County, Arkansas, to his brother, Alfred Livingston Moore (1803-1884) of Person County, North Carolina. The Moore brothers were sons of Phillips Moore — a planter and machinist, who relocated while a young man from New York to North Carolina where he married and reared his family; he built the first horsepower threshing machine ever used in that part of North Carolina, and served a long time as surveyor, at which latter work he contracted pleurisy, which terminated his life in December, 1840. Their mother was Elizabeth Dudley.

Stephen was married in 1830 to Mary (“Mollie”) Morrison Gray (1813-1855) in North Carolina. She was the daughter of General Alexander Gray (1768-1864) and Nancy Burrow (1783-18xx). Stephen and Mollie had at least eleven children, including the young the youngest — Robert Gray Moore — with whom Mary was pregnant at the time this letter was written. The 1860 Census shows Stephen to have had as many as 26 slaves on his plantation in Hempstead County, Arkansas.

Alfred was married to Sarah (“Sally”) Cates (1803-1884). He was an enterprising and successful planter, of North Carolina, and he and his family were members of the Methodist Episcopal Church. 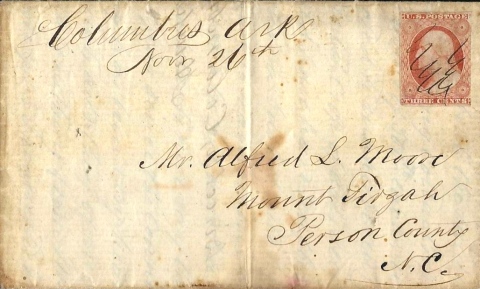 I have waited a long time for an answer from you to a letter I wrote you the latter part of July last enclosing you a Draft payable in New York for five hundred dollars, and as I have not received acknowledgement of its receipt by you, fear it did not go to you safe, or if you have written yours, it did not come to hand. I fear something wrong somewhere. If this should reach you, write immediately. Lately I sent you through my brother-in-law, Jesse H. Lindsay ¹ of Greensborough $114.00 and have written to Mr. George Laws requesting him to pay you the balance of my note as soon as he can.

Since I last wrote you, my wife has been in a most distressing situation with a cough that she took in the spring. For the last three months we have nursed her day and night, sometimes for a week or more she seems to improve, then all at once she grows worse, and for days it appears like she could not long survive. For the last six weeks, she has not been off her bed but once, and then only for a few minutes. What makes her situation still more distressing is she is six months gone in pregnancy. What is to be the result, a wise and overruling providence only knows. Hers is the only case of sickness I have had in my white family since we got here.

This part of the country has suffered severely the present year first with continued rains in the spring up to the 20th June that nearly ruined the crops, when at that time a drought commenced that lasted until the 19th September. Corn crops were cut short one half and cotton about the same. I have nearly done picking out my cotton crop and will make about forty bales of 500# each. When I pitched my crop, I expected to make seventy or more. If it was not for the finest drop of oats I ever saw made (71 single stacks) I would have hard scufling the next year. Corn is worth a dollar a bushel and has been since it was gathered. And to travelers on the public thoroughfares it is worth $1.50 a bushel and hard to get at that. The old inhabitants here say there never has been such a crop year since the country was settled.

The country has been very healthy generally — very few complaints and they of mild character.

I have heard nothing from Mr. Read & Co.’s suit against us since I wrote you. I requested Mr. Norwood to write me from time to time but he has never written to me but once, and that I think was before I wrote you in July. I would like to know all about it. Do write me particularly on the subject.

Fearing this may not reach you through the Mount Tirzah Post Office, I send a duplicate copy directed to Roxborough. Our love to all your family. My wife desires to be remembered particularly to yourself and sister Sally. 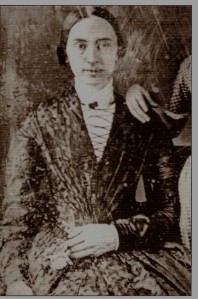 Jesse was graduated from the University of North Carolina at Chapel Hill in 1827. He married his cousin, Amelia Gazeal Ellison, of Darlington, SC, in Randolph Co., NC on 14 May 1833. Amelia was a daughter of Dr. Zachariah Ellison (1786-1821) and his wife Sarah “Sallie” Harper (1789-1858, who later married General Alexander Gray).

Jesse Harper Lindsay was a successful merchant, and President of the National Bank of Greensboro. He and his brother Jeduthan were prominent in the development of the city of Greensboro. Jesse served in the NC General Assembly in 1835-1838 and was elected State Senator in 1844. He was a close friend of NC Governor Zeb Vance. He was a devout Christian, and devoted member of the first Presbyterian Church of Greensboro, which he helped found and direct. 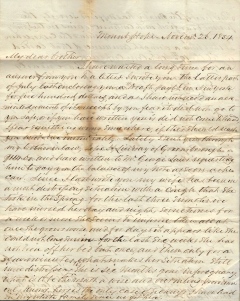 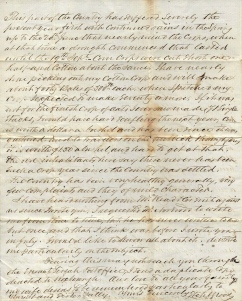