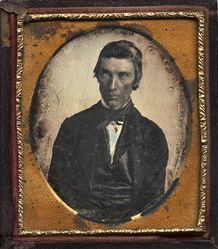 This letter was written by William Allen Simerwell (1826-1875) to his parents, Robert Simerwell (1796-1868) and Fanny Goodrich (1789-1855). Rev. Robert Simerwell, a Baptist preacher, came to the United States from Ireland with his parents, his four brothers, and his sister, arriving in Philadelphia in the spring of 1812. All the members of his family died from ship fever except Robert, leaving him a 16 year-old orphan. He found employment as a blacksmith apprentice, receiving his food, lodging, and clothing, while he attended school at night. “He had then served as a missionary among the Pottawatomie Indians in Michigan Territory and later at the Baptist Shawnee Mission on Pottawatomie Creek in eastern Kansas. In 1848 the government set up a new mission a few miles west of Topeka. In a three-story stone building with twelve rooms, boys and girls were given instruction in the manual arts, as well as in reading, writing, arithmetic, and religious subjects.” In the fall of 1854, he and his wife, Fanny (Goodrich) Simerwell, retired from active work in the Pottawatomie Mission to homestead on 160 acres southwest of Auburn, Kansas Territory. 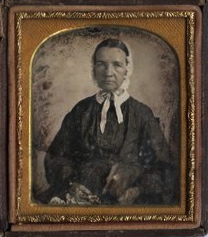 The circumstances necessitating William’s departure from Shurtleff College in 1851 are not revealed in this letter. We know from an earlier letter that he was attending the school as early as 1845. [See: Rev. Washington Leverett to Rev. Robert Simerwell] William later moved to Auburn Township, Shawnee County, Kansas Territory. In 1857, he and John E. Moore moved to the village and built a saw and grist mill.

This letter was addressed to Westport, Missouri, because there was no regular mail delivery into the territory where Robert Simerwell was laboring as a missionary. Letters were generally held at Westport until someone came to retrieve them, or they were hand carried by trusted acquaintances traveling on the California Trail that passed up the Kaw River.

I received sister’s letter last Tuesday. Yours came to hand Friday 28 February. I will not attempt to describe my feeling at the thought of leaving school or College but God’s ways are not as our ways nor His thoughts our thoughts. O that He may strengthen me so that I may bow with meekness & a submissive spirit. But they that wait upon the Lord shall renew their strength; They shall mount up with wings and eagles; O that I might thus mount up on the wings of faith & rise above the troubles of this life.

I expect to start for home a week from this day. I was out to see sisters Ann & Elizabeth Saturday, They feel quite sad to have me leave but are willing to stay. Br. J. Knapp ² has been preaching in this place for three weeks. He closed last evening. Had a very interesting time. 25 persons hopefully converted & blessed be the name of the Lord. Sisters Ann & Elizabeth were among the number. They were baptized the 23 of February. Tongue cannot express the joy & gratitude of my heart.

I think my health is some better than when I last wrote. I hope to see you all ‘ere long. Excuse me for not writing any more. Should anything prevent me from getting off next week, I will write. Will you all especially pray that I may be reconciled to the Providences of God.

¹ Shurtleff College was founded 1827 in Alton, Illinois by Reverend John Mason Peck, a Baptist minister, as Alton Seminary. It was renamed Shurtleff College in 1836 honoring Dr. Brendon Shurtleff of Boston, who donated $10,000 to the college. In keeping with Baptist ideas about equality among men, it accepted students of all races and, by the later nineteenth century, women students as well as men.

² This was no doubt Elder Jacob Knapp (1799-1874), the celebrated Baptist Evangelist. A biography for Elizabeth Simerwell (1835-1883) states that she was baptized by Elder Jacob Knapp in Alton when she was fifteen years old (1851).