This letter was written by Dr. James A Watters (1802-1891), the son of Samuel Watters (1774-1821) and Mary Garvin (1776-1848). Dr. Watters was married (1821) to Jane Priddy (1801-1882) in Indiana and came to Rockville, Parke County, Indiana, to practice medicine in the 1820s. It is said he was the family physician of Joseph A. Wright who later became the Governor of Indiana. Dr. Watters relocated his family to Wassonville, Iowa in 1841 where he practiced medicine and went into the milling business with his brother Samuel, a co-founder of the town. He also served as the postmaster at Wassonville which is why he was able to send this letter without postage.

Watters wrote the letter to his son Thomas Garvin Watters (1825-1885), the husband of Climena Bivens (1829-18xx). Married in 1846, Thomas and Climena had at least two children by the time he left for California on the overland trail in the fall of 1850. These two children were Melissa J. Watters (1848-1885) and Lois Elen J. Watters (1849-1850). The latter child’s death in recorded in this letter and occurred after her father left for California. We know from census records that Thomas returned from California and resided on the English River in eastern Iowa before moving to Holton, Jackson County, Kansas. He died in Hillsboro, Washington County, Oregon.

We learn from this letter that Thomas Watters made at least part of the journey to California with his brothers, John P. Watters (1830-1849) and James Francis Marion Watters (1834-1880). It seems that John become ill on the California Trail and died before reaching California — perhaps in Salt Lake City where we learn that Thomas and “Marion” Watters decided to spend the winter. We know from family records that Marion returned from California prior to 1854 when he married Lovina Shafer (1838-1880). Marion served in Co. E, 10th Iowa Infantry for about six months during the Civil War. He lived for a time in Holton, Kansas but relocated to Mt. Pleasant, Henry County, Iowa prior to his death in 1880.

The Wassonville Grist Mill of 1850

Dr. Wasson wrote this letter from Wassonville. A local history records that as Indian lands “opened up directly to the west [of Wassonville] in 1843, a major trail developed through Wassonville that brought a continuous flow of travelers hoping for a new life in the West, and was exposed to the frequent outside influences that went with a developing frontier town. Wassonville, and its companion town of Dayton were sometimes referred to as “Sodom and Gomorrah” in the early days, due to the availability of whiskey and frequent agitation by broader, external political interests and activities. Settled in a scenic, low-lying valley of the English River, the town flooded semi-annually, devastating the homes and businesses, which were quickly rebuilt on higher ground by the tenacious settlers.”

It was Wassonville where Dr. Watters’ brother, Samuel A. Watters, laid out the settlement in 1840 and “built a mill on the north bank of the English River. The business section was also on the north side of the river. The 1840s brought brought new settlers with their families and cabins sprang up everywhere. In 1847 the mill burned down and was replaced with a saw mill. 1n 1850 a second grist mill (above) was built on the south bank of the river. It was operated by a water-powered turbine wheel fitted into a mill race beneath the mill.” Wassonville is now a ghost town.

I this day write you a few lines to let you know that we are all well at this time. Also all of your relatives as far as I know. I do not know how to write to you at this time as we have not received any letter from you since the 4th of October and you stated at that time you had not received any from us. It may be you have got them since you wrote as we have sent as many as 10 to you to California all directed to Thomas G. Watters & Brothers. After I got the letter that you & Marion was agoing to winter at Salt Lake. I wrote to John to get the letters open & read them & keep them until you got through in the spring. I also sent one to you at the Lake, I had sent one to Session & you boys so it would get there by the time you would get there. If you have not got any of our late letters, I must write the same that we have sent in several letters.

The death of [your daughter] Lois Elen on the 10th of October of congestive chill. Daniel Shaver sent you a paper containing her death. Mary Jane thinks we made a mistake in the time of her exit. She thinks we said the 10th of September. If so, we was wrong. [Your wife] Climena & [your daughter] Melissa is hardy & well. Climena has learned to write so as to send you two letters of her own composing. I can not write as I should if I knew you had got our letters but I shall write some things that I have wrote before.

Pinkerton got home the 9th November with about 8,000. He says don’t exchange your gold for paper money in the states as a most all that is there is counterfeit. One man (Mr. Adams) exchanged $10,000 on the State Bank of Missouri and lost it all. Tell John the same if he is not with you. Isaac Ramsey is there some where and has made a fortune. Joseph Wasson backed out before he started this winter.

Tell H. Leaken that his wife & child is well. I see them a day or two ago. Miss Converse is married. Leaken is in Weaver Diggins on Weaver Creek, Elderado County. Your Aunt Elizabeth Trusler has moved here & lives in Wassonville with her son-in-law — the shoe & boot maker.

I want you to write once a month so we can hear from you all as we do know you have many risks to run or else we get false reports in the newspapers. We hear the cholera is very bad in Sacramento City & San Francisco — also some in Nevada City where Marion was when you wrote. I also want you to know that the cholera is bad at Chagres, the Isthmus, Jamaica, & Cuba, if you should undertake to come home this spring — that is, if you have made enough to pay you for your trip &c. I want you boys to raise every dollar you can to bring home as I shall be hard run to keep things together until you come. After you wrote you was glad the girls did not go with you. I have got some land entered and wait until you come for their pay and will get some timber more if I can. [Your brother,] Samuel C. Watters has entered 2.29 acres & paid it most all with his pork. Pork is $3.50 a hundred. Marion, I want you to make all you can as some says you will spend as fast as you make. I want you to show hem that you can save as well as make money. I have a hard time this winter a doing all myself. The girls help me to feed &c. I got a hand this week for one month to help me log. We have had a pleasant winter so far — not snow enough to sleigh ride as yet. How I shall get along until you come, I do not know, but will do as well as I can with the hope that you all will get plenty to help me when you come home. I don’t want you to beak off and come if you can make money fast & if you have your health as you must have suffered enough to have your shares if it is there. You must be careful or your gold will be stole as there are many that come home and loses their money on the road. So you must be on the look out or you can’t tell who is your friend. We want you to write if you know anything of Shearman & Duncan Shapp. Andrew Wilson wrote you two in his letter dated October 19th & said you was well.

Mary Line & her boy is well & hardy. He sits alone. Jacob Yeager is going to Iowa City to live & work at his trade. Our country is going to be crossed up with railroads. You wished Climena not to sell your two lots if she could do without it. She can and will not sell them. Also I redeemed the one you left in McIntosh’s hands so she has all three now, and will keep them until you return.

Mother has been very uneasy about Marion for fear he was or has been very sick. She is anxious to know if his tongue troubles him any now. If John is not near you, write to him and let him know the contents of this letter so he can know that we are well & his relations. Jane Shaff Shearman’s wife is well & hardy. The letter John Shaff sent dated October 1st with the gold dust in came safe in the same package that yours came in. We wrote immediately back. The girls — both Climena & Mary Jane — have been more cheerful since those letters came that you was all safe through than before. Coryell has never wrote since he was at Salt Lake and never stated that he had left. James Stebbens, tell John that his Uncle Swaize was out this winter & his son-in-law Ray. Robert Gilliam is about selling & is going to move to Massonville. Young has bought the tan yard and Jones is going to leave town. Hewett has bought Jones’ house & is coming to town. We have another store in town — a Mr. Michales.

Stillings is building a large Hotel at the end of the bridge. McIntosh has gone to Sigourney. Wesley Smith has put a hotel in Sigourney and moved in. S. Ballard is putting up a frame on the back lot west of yours in the S. W. corner of town. Gray has put up a house between him & Tillings. Kirk has sold his claim and is back to town.

We have had a good winter to saw. Stillings & my mill book amounts to about $600 up to January the 1st 1851. Jacob Yeager is going to frame his house here and haul it to the city and put it on his lot to live in. We expect to have a run of cards in the new mill next summer. We have not got her started yet. We lacked about one week’s work when the water drove us out but if it freezes down, we will finish this winter.

I must close for the want of room for the present but will write in a month again so no more but remains your affectionate father, — James Watters 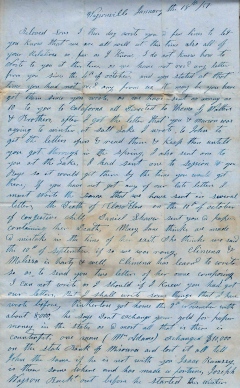 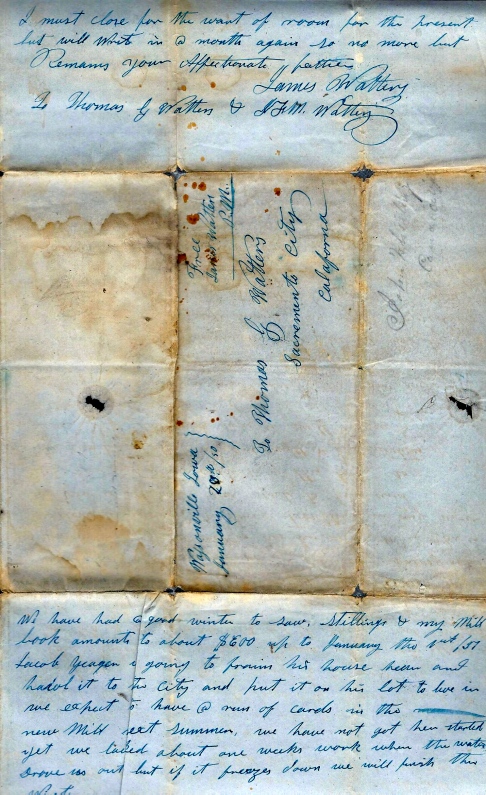