This letter was written by George Randall Roberts (1818-1891). From the year 1848 until his death in 1875 George R. Roberts was a prominent member of the lumber fraternity of Chicago. Mr. Roberts was born at Mohawk, Herkimer County, New York. His father, Col. Amos Roberts, was born at Litchfield, Connecticut, in 1786, and served with distinction in the War of 1812, where he won a colonelcy. He was a merchant by occupation and came west to Grand Rapids, Michigan, in 1837, where he for many years kept a general store, combining with it the manufacture of lumber on the Rogue River, a branch of Grand River, and these occupations were continued until his death in 1873, aged eighty years. He was married in 1809 to Sally, daughter of Jacob Hurd, of Middle Haddam, Conn., who survived him and lived to the ripe old age of one hundred years and seven months, passing away February 7, 1891.

George R. received his education in the common schools of the day, and in 1838, with his brother Amos, began farming near Ionia, Mich., but his inclinations tending more to merchandise, he abandoned the farm in 1847 and settled at Chicago, in a lumber business, at Harrison Street and the river, his father and younger brother William supplying stock from their mill on Rogue River, and being the silent partners of the firm of George R. Roberts & Co. During the same season the business was sold to D. R. Holt, who from that time has figured in the trade of this city. Losing trace of his record for a period subsequent to the panic times of 1847 we find him again recorded in the directory of 1851 as located at a yard on West Water Street, and in 1853-54 he is described as being on the river between Madison and Monroe Streets, and about this time we find his name in connection with that of T. Sylvester Parker. The family still continued to operate a mill on the Rogue River, upon which Mr. Roberts mainly depended for supplies, which during the earlier years, from 1838 reached Grand Haven by raft, and were there loaded upon vessels for Chicago. The partnership with T. Sylvester Parker terminated in 1861, and during 1862 Mr. Roberts operated his yards alone, but in 1863 took as a silent partner William H. Waite, then cashier of the Western Marine and Fire Insurance Bank, Morton B. Hull representing the Waite interest and acting as book-keeper for the firm until the spring of 1866, when Mr. Hull and James B. Calkins purchasing the Waite interest, the firm became Roberts, Calkins & Hull, and continued in business until late in 1868, when Mr. Hull, purchasing the Calkins interest, the firm on January I, 1869, became Roberts & Hull, and so continued for three years after the death of Mr. Roberts in 1875, according to a request in his will, in which Mr. Hull was named as executor.

In this letter to his father, Robert mentions the Foss family who were also in the lumber business in Chicago. The family — four sons and four daughters – from Strafford County, New Hampshire, came to Chicago in the 1840s. Samuel and Robert Foss set up a planing machine of their own design and manufacture in a two-story building on Market Street, between Washington and Madison, near George’s lumber yard. They did a good business there until the building was destroyed by fire in 1847. Subsequently they rebuilt at the corner of Canal and Monroe Streets.

Sir, I have just returned from the office with a letter from you. I sent a few lines last evening by Benj. Smith — a few lines which I wrote in haste but as I said in my last I would write your every Saturday, I will do so. You mention in your letter that Mr. North is about ready to commence cutting hard wood. You may have it 2 inch thick. This kind is most used & called for axel trees for one horse wagons 3×4 of hickory or hard maple, for two horse wagons cut 4×6 hickory or hard maple. Bolster stuff for wagons 3×5 for other uses in wagons 2 inch plank some 1½ inch as far as regards making contracts for another summer it is not time as yet. The carpenters have not as yet made any contracts. In January or February, they will be contracts I think without doubt to be got hold of. That is, I have talked with the best of them & say they will give me the preference. Underwood has formerly got the heaviest & best contracts but as he is going out of business i the spring the appointments in town will be broken up.

Mr. Crawford was just in the office. I told him you had been at the mouth of Grand River for 10 days trying to get his lumber shipped but was impossible [and that] he would have to wait until spring so the old man went off satisfied.

I can tell you it is tight times in Chicago for money. Business is very dull indeed. No farmers coming in, of any account, but I lay it to the extreme bad going we have had in a great measure. Merchants & Lumber Dealers complain bitterly.

The roads are now frozen up. It will soon be smooth traveling. I am in hopes that trade will revive — it must in a measure.

Mr. Pierce and Mr. Sh____ have made up their minds they wait until spring for their bill stuff. Mr. Pierce was in the office a few moments ago. I told him I was very sorry that he was disappointed. He was satisfied I done all I could to get it here. Mr. Sh____ is mentioned above here but he is not satisfied. But I shall probably get along with him some way. Pork will be in plenty next week & I shall put up some if I can buy right. I shall not make any attempt to lease that lot of Peck & Boyer. You can do as you think fit when you get over. I am sorry I leased Smith’s as it don’t appear to meet your wishes. The reason of my doing so was the yard we now occupied was too small. If we leased no other, we could not get along without it. For my part, I thought and the enquiry I made, that yard & storehouse be held too high & you would not be willing to pay that amount for 5 years only. Consequently I thought best to secure a place for the lumber next season. I can get out of the bargain I made with Mr. Smith if you think best as I have drew no writings with him as yet.

The receipts this week is $22,890 this week — a small amount. I have the same on hand I had last week of cash. I don’t think of anything more to write at present.

Mr. Foss sends their respects to you. Miss Foss says you make a first rate beau, a gay fellow, &c. No more from your affectionate son, — Geo. R. Roberts

P. S. Give my respects to all friends. Write often &c. 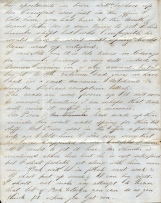