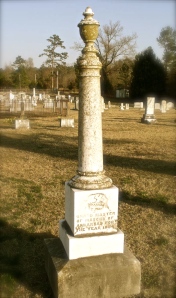 This letter was written by Gen. Nathaniel Green Smith (1802-1869). Smith “was born in Chatham County, North Carolina; he was an industrious and intelligent young man, whose interests were more of a commercial and political nature. He served in the North Carolina House of Commons, 1827-31.

General Smith was married to Sarah (Sallie) Kimbrough Martin (1804-1882) of Wake Forest, some miles from Raleigh, in February 1828; a daughter of John and Mary Kimbrough Martin of Forest District, Wake County.

The Smith’s moved to Hardeman County in west Tennessee a few years after their marriage, where they lived and prospered for several years; made their final move to Dallas County in 1847. There General Smith grew into considerable state-wide prominence in his associations with Freemasonry and the Baptist Church.

Smith wrote the letter to his cousin, Maj. Malcom McNeill (1796-1875) who was born in Person County, North Carolina but moved to Christian County, Kentucky, one mile south of the Sinking Fork bridge on the road from Hopkinsville to Princeton, in 1817. He began accumulating property at an early age, first near his home in Kentucky, but later he bought thousands of acres in Mississippi and within the city of Natchez, which greatly increased in value. He made his first investments in Chicago in 1842, at a time when travel there required carriages or horseback. He became a man of great wealth, described in an 1884 history of Christian and Trigg counties as “perhaps the richest man in the county, with a large estate and many negroes both there and in Mississippi.” 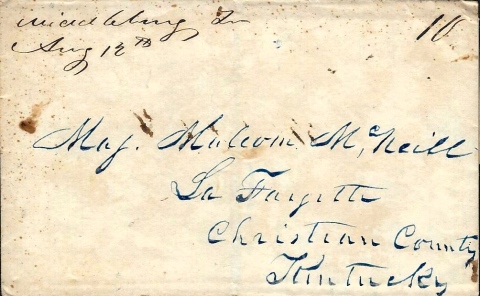 I promised Mr. John McGuire to let you know you could get him as an overseer for your Coahoma Place. From my knowledge of him & from information, I make no doubt he would suit you as he is said to be no. 1. He has a wife, no child, I think will live with you for $350. I told him I thought you would give him that price. If you see for upon to employ him, you can negotiate the matter through Peter F. Siler with whom you can communicate on the subject.

My family have been sickly. Lost our sweet little daughter Frances Agness on 21st ult. Lost also four negroes. The will of God be done.

I have bought land in Dallas County, Arkansas. Expect to carry my negroes over in a few days & my white family about Christmas. I like the country very much.

My family join in love to you & yours, cousin. Tom sends his respects to friends.

We should be pleased to see you & any of your family at our house next fall & when we get to Dallas [County], do come & spend either summer or winter with us for it is healthy at all seasons.