This letter was written by Daniel VanDenburgh (1824-1911), the son of Andrew VanDenburgh (1781-1856) and Dinah (“Deina”) Williamse Miller (1784-1886) of Jamesville, Onondaga County, New York. I could not find a graduation record for Daniel from the Baltimore School of Dental Medicine which was first established in 1840. However, the 1880 Census shows Daniel and his wife living in Santa Clara, California, and he was practicing dentistry there. [Note: the family name is spelled variously Vandenburgh or VanDenburgh in genealogy records; Daniel seems to have signed his name VanDenburgh.] 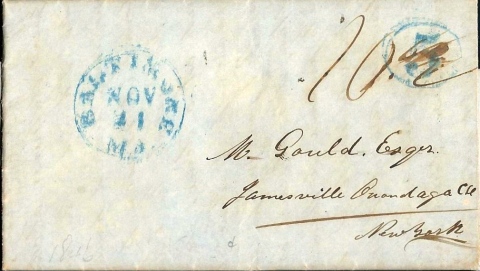 I embrace the present opportunity to inform you that I am in a land of the living where the sun never shines, where the rain ever falls, and a tremendous din is ever heard. Such at least has been the case since I have been here until within the last few days. But now the sky has cleared, the sun shines bright and warm, and Baltimore appears in its true colors, which by the way are very numerous — comprising every shade from white to black, among which I need hardly say (since it is known as the city of beauties) that crowds of beautiful women are not the least conspicuous pr attractive. But Miff, on this point just tell the girls of Onondaga for me that though I have had fine opportunities for seeing the beauty of Baltimore, that of my native county has not been eclipsed. And indeed, how could it be? Beauty cannot live in cities. Nothing but the purity and grandeur of the country is favorable to its existence. At least it would flatter their vanity to tell them that though all the world was ransacked for a rival, none nearer angels than themselves could be found.

But you ask how do you like dentistry and your Dental College? Well sir, I do not regret having chosen dentistry for my profession. I think I shall like it. As to the college, it affords every facility for our advancement. Our professors are not overly competent, but they are interested in their work and determined that their undertaking shall prosper. Every facility which it is in their power to offer to make us good dentists is at our disposal. Our lectures embrace not only the mechanical and operative parts, but anatomy, physiology, &c. — everything, in fact, which is in the least connected either with mechanical or surgical dentistry. But the greatest advantages which it affords are to be derived from its mechanical department. Every variety of manipulation is here daily performed which in a private office would seldom be met with. The influence too which it gives to its graduates among the people is not to be despised. All the graduates of the college ares said to be well patronized.

My room mate who attended last winter term has been practicing during the summer in North Carolina and though he is not possessed of uncommon genius, says he has cleared about $800. He has now come back to graduate. We have several physicians in our class who have quit the practice of medicine to learn that of dentistry. Still, though everything promises fair, a good deal depends upon circumstances. As to myself, if I ever attain the profession, time will show whether it will afford me a living.

There is a great difference of climate between this and New York. Though the weather has been uniformly wet and rainy since I have been here, I have not yet found it necessary to have fire in my room. It is not usual to have snow here more than a week at a time so that sleighing while it lasts ir rare sport. The Baltimoreans all wish for its visits. But for my part, I would as leave it would stay away. Its absence is as great a luxury to me as its presence to them.

We shall have a week of holidays between Christmas and New York and if I was only near enough to come and “ring in” among you, I “reckon” we would have great times. Never mind. You who have the opportunity go it while you are young. In the meanwhile, I want you to set to work and write me an extensive letter telling everything, forgetting nothing, and being sure not to be four weeks about it.

Give my love to all my enemies. Remember me to all my friends. And finish this letter with thankfulness that one more weary thing has passed into eternity.

While I remain yours truly, — D. VanDenburgh