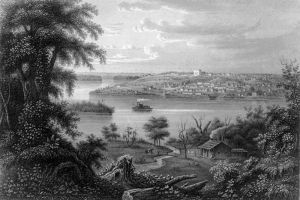 Calvin wrote the letter to Ebenezer Sanborn Rand (1804-1885), a resident of Carthage, Illinois, who was a member of the Carthage Greys — a county militia organized in 1844. The Greys were among the militia units assembled for the purpose of marching on Navoo and driving out the remaining Mormons, as described in the excerpt below, and the letter that follows.

On the 6th of June 1846, the people of Hancock county met at Carthage to arrange for celebrating the 4th of July. One of the citizens rose and said that since the Mormons were not all removed they could not rejoice as freemen. Mormon affairs then took precedence, and another meeting was appointed for the 12th, an invitation being sent to the gentiles at Nauvoo who had occupied the deserted dwellings of the saints. It happened that this was the day appointed for the assembling of the militia, with a view to raise volunteers for the Mexican war; and now, it was thought, was a good opportunity to show the Mormons the military strength of the county. The officers conferred, and without authority from the governor, marched their troops, some three or four hundred in number, to a place called Golden Point, five miles from Nauvoo, where they encamped, and opened communication with the city.

I have just received a letter from the seat of war by which I learn the uncertainty of when you will march for the Holy City. ¹ Please write me by next mail (Tuesday next) and give all the particulars of your affairs. If you have not then marched, say when you will and give all particulars. Should you march before Tuesday leave a letter for the mail. I have during several days past been wishing to come up to camp but my business is such that I cannot. I have yet some hope that I may come next week. If the army should have moved, I shall come by way of Warsaw. In any event, give me the particulars from time to time of whatever may occur. There seems to be a sort of apathy among the people and many are discouraged from moving from fear that the whole may prove abortive. For myself, I believe that peace and prosperity will not visit your county till the mormons are driven out and if certain men see fit to abet and assist them, such I despise worse than a mormon and hold them as wolves and outlaws.

Last spring I sent to you by Capt. [James D.] Morgan ² from Quincy a note requesting your assistance in collecting it. Did you receive any such and if so what is the prospect? The note was against John Cason who went to live at Kembrough’s place about 4 miles from Carthage. You have my best wishes for your success and I regret that I cannot offer better services than wishes. I will do & say to the utmost for you within my power.

Yours from, — Calvin Brown

¹ The Holy City is a reference to Navoo, Illinois – the mormon city constructed on the Illinois shore of the Mississippi River in 1839. After Joseph Smith’s death in 1844, many of the Mormons departed Navoo and began the trek to Salt Lake City. Other Mormons refused to be driven from their homes in Illinois until 1846 when it became clear that their presence would no longer be tolerated.

² Capt. James D. Morgan led the Quincy Rifles, a militia unit that helped maintain peace between the feuding Mormon and Gentiles in Hancock County in 1844 and 1845. The unit was later enlisted for service in the 1st Regiment Illinois Volunteers under Col. Hardin in the Mexican War.