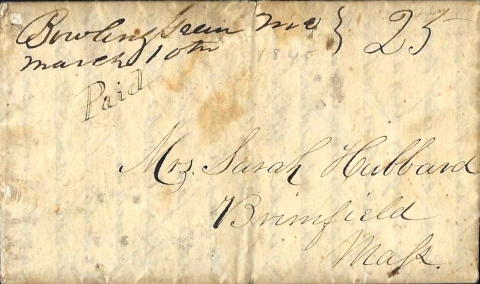 Accept my sincere thanks for your kind regards for an absent and stranger brother. You will perhaps expect an apology from me on account of my silence. If you accuse me of apparently disregarding the claims of a new sister, I plead guilty to the charge, and ask for clemency at your hands.

You must have forgotten in calling an “amateur” an adept in classical literature that you were addressing a resident in the wilds of Missouri — the far West; that boundary line between savage & civilized life, with perhaps a nearer approach to the former than the latter. Is not this your opinion of us? Would you know my own views of this county? They may be partial. I believe it is natural for all who come to this country from the East to give an exaggerated account of all its good qualities, while the objections are almost entirely lost sight of. If I should fall into the same train, attribute it to a disposition of our nature, rather than a want of personal integrity.

Of the state of society here, I shall say very little. To tell you I dislike it or otherwise would give you about as definite an idea of its true condition as one gets of the size of an object when it is compared with a piece of chalk. To understand a description of this kind, it would be necessary that you should first know something of my standard of excellence. The task of enlightening you on this point I will not at present undertake. I will proceed to speak of Missouri physically. Our past winter has been delightful. No snow, no cold weather, or at least nothing that would bear even a remote comparison with a winter in Yankee land. The spring thus far is equally charming. Farmers are planting their corn — the “snow drop,” the “anemones,” and the lilies of the prairie are beginning to show their blossoms. Everything bespeaks the merry month of May in old New England. By the way, you have never seen a western prairie. The hills and mountains of New England are indeed pleasant. I have lived among them and love them. But there is to me a beauty and sublimity about our almost illimitable prairies that no landscape I have ever met with at the East can equal. To a person who has the time and means, it is worth a trip from Massachusetts to Missouri. A single view, however, is not sufficient. It must be seen on fire — a truly grand and awful sight. It must be seen in the summer with its sea of grass and blooming flowers. It must be seen under all circumstances two be fully appreciated. But I cannot give you minute descriptions. The space of one short letter will not admit of it. You undoubtedly can get the history of our state from other & better sources.

Towns and villages are rapidly growing up among us, settled by people from all parts of the United States, but more especially from the middle and northern part of the southern states. Yankees are comparatively few. They mostly stop in Ohio, Indiana, and Illinois. The fact that they are free states and this is a slave state [edited] accounts for it. Missouri is southern in feeling. he people join the South in its opposition to northern influence. This being the case, a Yankee is not looked upon by the uninformed class in a very favorable light. The better educated, who can see or appreciate our merit, treat us with more deference. There is a certain class of boors who live away from the towns that look upon us all belonging to the class of Yankee peddlers, who have so woefully imposed upon their ignorance. They think us very ingenious, but without a shadow of honesty or one redeeming moral quality. Whenever I wander to any distance into the country, as I sometimes do, and my origin becomes known, I seldom escape without being asked to fix their old wooden clock or show them a Yankee trick. The little urchins too who are said to be familiar and even impertinent with strangers generally, hide themselves in some obscure corner and scarcely dare to take an occasional peep. But this is an extreme case.

There is a vast difference between the people of the towns and villages of the West, and the country in point of education, intelligence, and refinement. This I think can be accounted for. The farmers who came here, or a majority of them, do it to escape the labor of cultivating a less productive soil. They find that they can live almost without labor and they become indolent physically. Then almost as a necessary consequence, mentally.

I intended to have given you an account of my employment, my determinations for the future; with a postscript to Newton. I see I shall be obliged to defer it; with a variety of other things that might be interesting — or at least as much so as anything that I have written. I will perhaps send you a larger sheet next time.

My respects to all inquiring friends. It surely affords me a pleasure to learn that I am favorably remembered by the good people of old Brimfield. The ice is broken, as the saying is, — shall I not hear from you again? With the sincere regard of your brother, — John Hubbard