This letter is signed “D. L. LaTourette” who I believe was David Louis LaTuorette (1823-1882), the son of David L. LaTourette (1778-1852) and Hannah Hegeman (1791-1868) of Smith Hollow, New York. David married Emma Matilda Booth (1824-1908) in Clinton, Michigan in April 1845. By 1850 he had moved his wife and two children to St. Louis, Missouri where he found employment as a clerk. While in St. Louis, he submitted an application and obtained from Washington D. C., a patent for a paint mill (dated 13 June 1854). By 1860, David had moved his family back to Michigan where he took up farming in Tyrone, Livingston County, but he quickly gave this up for banking (see 1863 Draft Registration Records) and then moved his family to Dover, Ocean County, New Jersey, where he also found employment as a banker.

When David wrote this letter in January 1843, it appears he was clerking at the mercantile in Ludowville operated by Calvin Burr and Henry Lord (see footnote).

David wrote the letter to a distant relative John LaTourette (1822-1909), the son of Peter D. LaTourette (1784-1883) and Anna Ogden Quigley (1794-1859) of Genoa, Cayuga County, New York. At the time this letter was written, it appears that John LaTourette was working in the store on Genesee Street of Mr. G. S. Murfey in Auburn, who advertised under the heading, “CONTINUED EXCITEMENT AT MURFEY’S CHEAP STORE.”

Contrary to my expectation, when I last addressed myself to you, I again take my pen in hand to spend a short period of time in communicating my feelings and impressions to one whom I am bound by every tie of affection to esteem as my most worthy acquaintance and most constant friend, ever faithful and confiding toward me, watchful in my welfare, and ready to sympathize in my misfortunes and draw the chords of friendship still closer around our understandings. 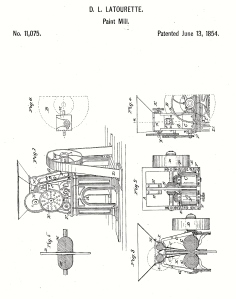 When I last wrote to you, I was fitted to do justice to so worthy a friend and utterly incapable of representing to your susceptible understanding the real state of my mind or to follow a natural train of thought, which accounts to you why my last was not more lengthy. But yet setting aside my inability to write at that time, I should have considered it doing myself great injustice in giving you a long communication upon my own hook when you was honestly indebted to me for three former letters successively without answers. This consideration, perhaps, would have influenced me to a very great extent had I been in a healthy state as I consider that you ought to have had some well authenticated reason to offer for your neglect! I was very glad to receive a letter from you and was much gratified on reading it as I had not heard from you in a long time and began to despair of ever again hearing from you and could never think of it without being convinced in my own mind of your indifference about writing. But I could not believe that two old and tried crony’s could become indifferent to each other so easy. We have had in one day a great many delightful times — and such as will live long in my memory and be cherished as the most worthy of a sunny place in my remembrance. Have we not toiled, sported, and wandered together; have we not trod the forest in company and conquered the raging ___ of the old Cayuga together, and, now to have these long cherished ties of friendship severed asunder and broken forever would cost me many a trial of repression! But I hope that such a trial will never be necessary. On my part, I know it will never be.

I should like to see you very much and hope that you will come down and see me as you suggested. When you come here, come on Saturday and I will return with you as I can walk back with little or no inconvenience on Sunday evening.

Friday Evening. John, I commenced yesterday expecting to finish before I left off but I was disappointed as I could not find time to write any longer. This evening I think I shall be able to finish this as tomorrow I shall have an opportunity to send this to you by private conveyance as I am [aware] Mr. Burr is expecting to return to Auburn tomorrow morning which opportunity I shall improve to send this directly to you.

I have not heard from Genoa lately and not tell you how they are but presume they are all getting on strait as they were about right when I was down two weeks since, at which time I had delightful visit as I always have when I meet the girls. I should like to have met you there very much as I imagine that we might have had a very interesting time. The great trouble with me is that I never have more than half time enough to visit as I generally go down in the morning and back at night. I should like when time enough to enable me to give them all a call. I have not been to Uncle Russel’s since last summer when me and Peter was down. John’s folks complain every time I go down that I do not spend more time with them & Sally accused me unjustly. I do not, to be sure, spend as much time with them as I should like to but I feel as much affection for them as ever I did and now I feel more anxiety in John’s success than I should in my own welfare. They mistake me altogether as regards my feelings toward them as the reason why I do not spend more time there when I am down is because I am always in a hurry and cannot visit with the girls half as much as I should like and to exchange their company for that of Sally’s and the children would show my poor taste, don’t you think so?

John, late difficulty has afforded me an immense spell of trouble and now I feel so much interested that it does really trouble me when I lie down to sleep. I do hope that John will get out of it with little or no inconvenience and my whole prayer is that he may do well. He is my brother and a kind one too and why should I not feel interest in his welfare. I should like to see you very much and want to talk over with you your future expectation and determination as I am quite interested in the course you pursue and then I wish to talk to you about my own determination.

I am inclined to believe, John, that I shall leave this country, perhaps forever, next fall and seek my fortune in a foreign country. I shall not stop here unless I can get 200 dollar goods at cost, board and washing, and if Henry Lord ¹ goes away in the spring and a green boy comes in his place, then I have reason to believe I shall be able to obtain my price. But if Henry stays, which he will for $175 dollars, then they will be able to get along without me with a boy in my place and consequently will not pay me over 150 or 175 dollars a year, which will not induce me as I cannot do worse to go west and have reason to believe that I can do a great deal better.

If I can’t do anything else, I can go to the southern states and go to driving niggers at 30 dollars a month. If nothing else is left for me, I can go to Texas and go to fighting. And then if that is not left for me, I will emigrate to California and go to catching wild cattle and shooting Indians. Thus you see that a thousand things are open to one choice and offering great inducements for us to engage. I can go west and go to clerking, teaching school, or even preaching, as I think I could walk into the affection of those backwoods men about right. What is your opinion? Don’t you think I have an active imagination? Do you think that I am green enough to stay here in this paltry hole for 150 dollars a year when I can turn my hand to a thousand things in the western country and as the country enrichens, I shall become rich with it. I am satisfied that this country is too old for a young man in my situation to do anything cunning and consequently I am bent on going west sometime or other. If I do not go next fall, I shall sometime after if health and life is spared me.

I am a curious kind of a fellow, John, but do not believe in a fellow’s settling down in a hole like this with a salary barely sufficient to support him and have the name of being a nice young man and thus live and die without ever being anything but a poor insignificant man without a second coat to his back, much less having a wife and family. In my opinion, you could not do worse than to stay in this land of the living.

By the way, have you heard from Henry lately? I wonder how the critter is getting on. Do you recollect how me, Pete & yourself broke down that tarnal board in Murfey’s window? I have not heard from Pete in some time. I guess he will go to farming in the spring with his daddy. So that I may know the worse, Lyman, I believe, has gone to Waterloo. He is doing a _____ business. The little coon is going it stiff. I shall want to hear from you often as you know I am not disinterested. I must try and see you sometime or other.

I do not have much fun nowadays as I do not go out as much as I used to as I have almost sworn off going to parties. Enough is enough, and I think I have spree’d it about enough.

¹ Henry B. Lord, the long time bank cashier of Ithaca, came into Ludlowville in 1838, and was connected with the Burrs in the mercantile business.