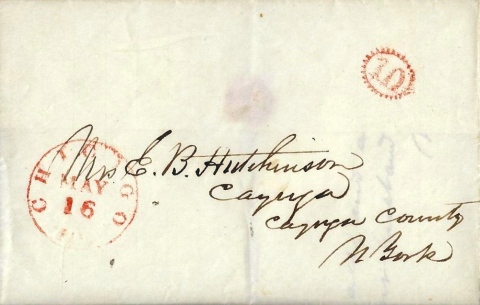 I arrived here this morning and found Col. Norton here. He says they have no money and that it is almost impossible to get any but that they have over a half million feet lumber — more than sufficient to pay me, and are ready and willing to let me have it. If my health continues good, I shall set about getting it over the Lake & selling it as fast as possible. I am satisfied that money is scarce here & it will take some time to dispose of it.

I was at William Boardman’s yesterday. They were well & had commenced building a house; his farm looks well except his winter what. That promises now about one fourth of what it did last fall and is far the best of any I have seen in Illinois. That crop is literally destroyed in this state. It is doubted by travelers in this state, who are reputed good judges & truth telling, that the coming crop will not equal the seed sown last fall. But there is a wide breadth of spring wheat on the timbered lands in Wisconsin.

The season is remarkably cold and backward. Capt. Allen, of the Nile, told me last evening, that day before yesterday his boat was brot to a full stand still against an iceberg in the straights of Macinac. There is very little corn yet planted north of the latitude of this place, and the farmers do not seem anxious about it, in the present unfavorable state of the weather. If the weather East has been as unfavorable as here, corn planted after this will be as well as that planted before.

Do not be in a hurry about selling our surplus wheat. there can be no fear of a depression in price only temporarily. I am anxious to hear from home and deeply regret the necessity there seems to be for my remaining here for some time to come. But there seems to be but the one way. Hence I shall arrange my business so as to be at Milwaukee most of the time.

Do write me on the receipt of this directed to that place. Tell me what news from Eugene as to sale of fruit or otherwise. Tell me what Henry has done & is doing, or rather tell him to write to me himself. I hope Sarah has recovered her health & that Willy & Hellen are well. Kiss them all for me. They will know better how much I want to see them when I get home. I am in hopes to be at home by the middle of June, but that is not quite certain.

I have forgotten all, and am, my dear wife, affectionately your husband as ever, — M. Hutchinson 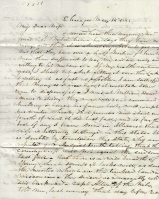