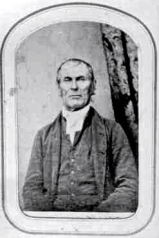 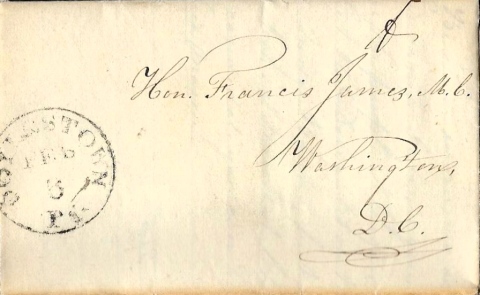 In my letter to you written about the first of May last stating the changes that were taking place in Bucks in favor of Gen. Harrison, I presume you supposed me to be too sanguine, as your letter dated “May 12th 1840” puts this interrogatory, “Cannot you send some good opposition man in place of J. Davis?” ¹ — To which I am now able to say yes, sir, and that too with the greatest pleasure imaginable, not only on account of the triumph of sound Democratic principles in Bucks, but also, because I am, and have been from my boyhood a warm, personal friend of Mr. [Robert] Ramsey.

You are aware that if Bucks had not “come out from among the foul party,” Pennsylvania would have been left to Gen’l. Harrison and returned “plow tail” Davis to Congress, which of itself would be sufficiently degrading to the County and State. Because I consider Davis a political gambler who is willing to be a noisy instrument for any party, or for any man who will administer to his ambition a crumb of the spoils occasionally, and I told him so. You will learn ‘ere this reaches you that our Masonic Governor ² has used his veto against a Democratic measure that he has refused to send on the “Resolutions of Instruction” and that he has pardoned the vilest of he vile. We have the most anti-Republican Governor that ever ruled this state.

P. S. A rupture has just taken place among the Locos here in regard to the election of delegates to the 4th of March Convention. The “Executive Committee” have advertised for a meeting to be held on a certain day to elect delegates who, it is surmised, are to oppose the re-nomination of Judge [John] Fox ³ and about 80 individuals have called a county meeting of the party to elect delegates also, but it is believed that are to be favorable to Fox. Bet these surmises correct or otherwise there is trouble in their camp, I assure you, and I hope it may result in good for the people at large. I think from present appearances that the delegates on the part of the Whigs here will go for Judge [John] Banks, but as I am not a politician, I may be mistaken. I think it likely that he will be the most available candidate you can have at present, provided he is not a Free Mason. — J. C.

¹ John Davis (1788-1878) resided in Davisville, Bucks County, Pennsylvania. He was a Democrat, served in the U.S. Army during the War of 1812, and served as a U.S. Representative from Pennsylvania’s 6th District 1839-1841. Davis was unsuccessful for his re-election bid to Congress in 1840. President Polk later appointed him “surveyor of the port” of Philadelphia, however. Conard derogatorily referred to Davis as a “plow tail” — a mule’s ass — who would be willing “to be a noisy instrument for any party.”

² David Rittenhouse Porter (1788-1867) was the ninth Governor of Pennsylvania, serving from 1839-1845. Conrad’s strongly anti-masonic stance caused him to label Porter “the most anti-Republican Governor that ever ruled this state.”

³ John Fox, as president judge of the Judicial District Composed of the counties of Bucks and Montgomery, took a stance against the exercise of Negro Suffrage in Pennsylvania and moved to insert the word “white” as one of the proposed amendments to the constitution. 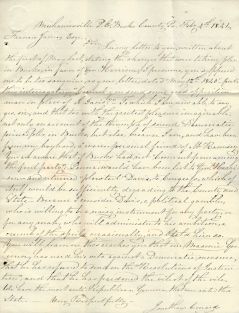 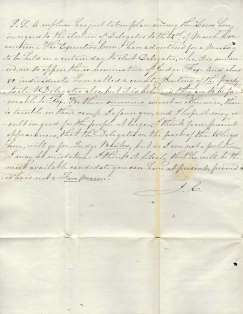