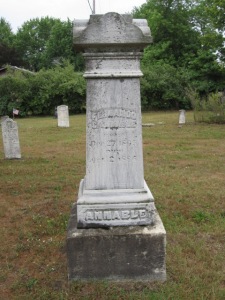 Fernando and Betsey came to Michigan in 1836 and settled on a farm in the soil-rich land of the Paw Paw River basin east of Almena Mills, Almena Township, Van Buren County. Anable’s property was adjoining Asa Crofoot, A. Burns, and Freeman Hall who are all mentioned in this 1841 letter. He was a Democrat in politics and served as a representative from Van Buren County in 1842. He also served as supervisor and treasurer of the town a number of terms.

Adding a note to the letter was John Ranney, Betsy’s brother, who apparently resided with the Annable family or nearby. We know from a county history that John was a bachelor:

“Ranney was a bachelor, and the story goes that when he left his New York home for the West he was engaged to be married to a charming girl, and the understanding was that he was soon to return for the wedding. The girl, however, speedily proved false to her vows, and not long after John’s departure married an idle, brainless fellow. Ranney took the matter so much to heart that he forswore womankind and resolved to die a bachelor. Meanwhile, the girl who had jilted him led a sorry life with her worthless husband, who, fortunately for her, died before many years. She wrote to Ranney informing him of the event, thinking, it might be, that his heart still warmed towards her, and that she might win him back; but Ranney paid no heed to her communication, and she died not long after in an insane asylum. True to his resolve, Ranney lived a bachelor, and died on his Almena farm in 1863.” 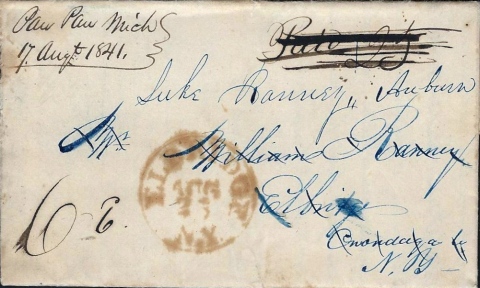 We have just received, dear friends, your letter & was glad to hear from home again. Betsey will be at home sometime in the month of October. She is much obliged to Luke for his offer of money but we are in hopes not to want it. Times are getting better with us. We expect Eastern funds for our wheat at 5/ per bushel. I have not sold any of Luke’s spring grain. No market for corn or barley at any price. I could not make it realize him in Eastern funds 1/ per bushel. Oats did not come up as high as was expected but this year crop is mostly cut off and I think will sell for a fair price although corn was never so good with us. Barley is very light. We have had a great drouth which still continues. The ground has not been wet but once since spring. I have a positive promise of Luke’s money from the mill in October and will send it by Betsy  — also what his wheat brings this year if Burns will thresh it and I think he will. If not, I will if I can get out all of mine and sell it and take his wheat for bread. If I cannot get out mine, I will borrow some and manage it so as to send him all the money I can. Jo. Abbott says he will pay his in October.

I have been much unwell of late but am now mostly well. I took a severe cold moving Cook from Indiana. He is sick of the country there. Says it is bad water and I thought so too, but poorer land. It is clay of the hardest kind. He has moved into [Asa] Crofoot’s house. Does not take hold of business very sharp yet. His calculations are as I understand to move into John’s house this winter. He expects to have it done by cold weather. I have given him the privilege of sowing 10 acres of Mac’s ground to wheat this fall.

It is something uncertain in what manner I spend this winter. I would like to return with Betsy and take a school in New York but deducting my expenses from my wages, I should have little left and my misfortunes this spring render it necessary to make some saving move. I can have the school at Paw Paw if I wish but do not know at what price. I also think I can get the school on Big Prairie Round at $25.00 and be boarded. I took some measures about a month ago to get the school and have met with good reception as yet.

Bestey says she does not want you to send out anything for her or Helen nor any fruit this fall. We have fruit enough to last us and John says he is not in want of any clothing this winter.

If I can have good luck, I shall sow 20 acres of Luke’s ground and 12 of my own. I have just finished threshing my seed and shall commence plowing this week. My horses prove to be good and sound and make me a good team — will plow as long as I can.

Helen has been learning to read this summer. Can read a little in readings.

It is a general time of health in this country as far as I am acquainted and a good deal of improvements are making in many places. Burns has built a barn and broke some. Hall has broke 20 acres. [Asa] Crofoot some and on the Territorial roads they have done a good business at it. They have formed a meeting on the Prairie not to take Michigan money for wheat and Eastern funds are expected here. This gives animation and hope to all. I shall leave for John to finish.

Betsey wants I should write for her as she is busy. Helen says tell grandma, “I am well.” She grows very fast and is awkward enough. She worships her cat and one of our horses. But her old dear Sam-bo is gone. But she has another equally as good for her but is not so handsome. What became of him we never knew.

As there is a small place left for me to cast in my might, I will improve it. As Fernando has wrote all news, I will state something about my affairs although I suppose that it will not be of much interest. I have summer plowed 40 acres and am calculating to sow that to wheat this fall. My spring crops are light on account of the drouth. I think that I wrote last spring about my losing one of my 4 year-old steers. I sold the other a short time since for 40 dollars. I have not time to write anymore and I will close. — J[ohn] A. Ranney

Mother, I should have written by Mr. Crain but I had no opportunity to send a letter down to him as Fernando was gone to Indiana and John was busy harvesting.

If you are as provoked as I am to think this missive was not filled out better, it will be best to have it remain a dead letter here. However, I will mail it and then pass your comments.

Mother wishes you to purchase a small brush suitable for painting window sashes. We are head over  & heals too in painting our chambers. Have finished the ceiling and am now painting the floor the second time. It all looks materially better for what has been done. Make the exchange of that pencil previous to your coming home again if you please. — Martha

Sarah has gone and I expect Samuel has started previous to this as I have heard he thought of going today. Mother says send that brush down to Woods’ if you have a chance.