This letter was written by George F. Sanborn of Newburgh, Penobscot County, Maine — formerly of Concord, New Hampshire. We learn from the letter that George is in some kind of business and also serves the Newburgh and Plymouth Communities as a part-time preacher. He reports in this 1839 letter that he has local news of the conflict in the disputed territory of Maine that resulted in the Aroostock War of 1838/9 between the United States and Great Britain. 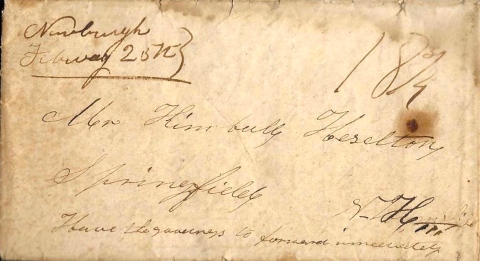 Yours & Co. bearing date Jan 23d 1839 is now before me for which you and Co. will receive my thanks.

The intelligence it contains is of the most cheering nature to me and, indeed, I suppose it is to every good man. I hope it will continue. I rejoice that some of my Br. Bartlett’s family are the subjects of it and hope they will all share in the same.

I am sorry that I have no more of the same intelligence to send you there. I have but it so happens that I have a little and there is better than none.

At Plymouth where I preach one quarter of the time, there has been some several I have baptised nine there of late, more probably will be soon. I have gathered a church at the village where I preach and the prospects…

But I will now give you some information on another subject of a different nature altogether. In accordance with a resolve passed by our legislature January 24, 1839, our Land Agents and Sheriff of the County in command of 150 volunteers started for the disputed territory (shortly after the passage of said resolve) for the purpose of arresting the plunderers thereon. They succeeded in getting some few of them and some of our men were taken prisoners and land agent was one of the number taken. The sheriff then returned home on an express. The Governor then ordered a thousand men to be enlisted and a 1000 of troops to be drafted from each Division making 8,000 in all. But 1000 only has been ordered to march. The thousand from this Division marched last week. It was quite a sight, I assure you, but the loads of balls, powder, guns, and blankets &c., &c. was more of a sight than the troops. Another 1000 is expected to march this week. One thousand more has been ordered from the Divisions. THey are now drafting — several companies drafted yesterday (Sunday) so you will expect they are in earnest or they would not be drafting on the Sabbath. I will assure you, it is a sorrowful time here at present. Mothers, wives, and all are in a real pickle, but what the result will be, I cannot determine in my own mind, but it really looks like war at this time. The country is all in agitation and confusion — it absorbs all other subjects with the meager part of community.

If any friends wish to know what I am about, just say to them some and see. And I will just say to you that my main business is preaching. I have had some public business to attend to all the time I can get from my business. I am using my ___  ___. Wife is well. SHe and her girl is closing up business in good order on the ____ business. Give my respects to all of our friends after taking a good share for thyself and wife.

Nancy wishes you to tell Elisa she….