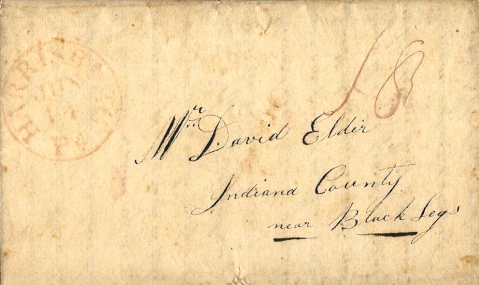 My Dear Brother and Sister,

I now take my pen to write a few lines and must acknowledge the privilege of having a sister to write to. I cannot express the innumerable blessings I am surrounded with in the midst of all my privations and trials. How thankful I ought to be to my Heavenly Father for the health of my family at present and for my own through this last winter, for my dear friends, it was indeed a serious interesting time to me. After sister Sarah’s death, I could scarcely content myself two days at home together without going to see sister Eleanor, but was frequently disappointed with unsuitable weather, but was often taken there and brought home. I hope my visits there may be profitable to me all my life, having the privilege of so many prayers and religious conversation. Mr. [James R.] Sharon and Mr. [William R.] Dewitt came to see sister Eleanor frequently. How sweetly they did refresh her soul. She said she could listen to Mr. Sharon’s prayers and Mr. Dewitt’s conversation forever. Mr. Dewitt says he believes he never saw an individual rest more pointedly on the rock of her salvation — the righteousness of Christ — than sister Eleanor. It gave me great pleasure to see sister Eleanor’s cheerful, humble resignation to God’s will through all her affliction. Religious exercises was all her delight. Her kind husband and three little sons spared no concern to part with. She said she could freely trust them in the hand of God who gave them.

The day previous to her death, I shall never forget. She called her son Joshua to her bed. She put her arm around his neck and raised her feeble hand upon his head. In that position, she continued in prayer for a time. I did not see her bid farewell with any particularly. At one time she took me by the hand and pressed it close to her breast but said nothing and left me to my own feelings. For a length of time previous to her death she did not shed tears for anything but for the suffering of Christ. She said her Redeemer was all she had. He was her precious Savior. The last hymn she asked me to sing was the 9th Book 2 — Alas and did my Savior Bleed — and the last verse I heard her repeat was Now though he reigns exalted high, His love is still as great. Well He remembers calvary, Nor let his saints forget. There is a number of religious passages, sister, with her own hand left, the inscription E. E. and hymns which brother Joshua says he intends to send to you.

Sister often spoke of you and brother Samuel and I know she felt for my desolate situation. She said the widow’s God would be with me, that I should be submissive and persevere in duty, It would not be long until we would all meet again. Near her last she always (when silent) appeared to be engaged in prayer, and when remarking the day of the week that it was the Latter day. Sister said, would it not be delightful to join Heaven on the Sabbath? and true it was.

The next morning at three o’clock, she took her final farewell to all things here below, to spend an everlasting Sabbath in that world above where the redeemed shall be forever praising God.

Dear Sister, I cannot describe to you my feelings, I being the only sister left here to follow the remains of another dear sister to the silent tomb. That graveyard is a very solemn place to me. A few days ago I was around them graves (so dear to me) alone while the woman I had taken with me was sweeping the meeting house previous to our communion there and on that day, Mr. Smith from Ohio assisted Mr. Sharon. We were very much pleased with Mr. Smith. Mrs. Smith — that was Margaret Burnett — looks very well, They intend staying some time with their friends here.

My dear friends, no doubt you may think me somewhat desolate at present. My son Joshua is at his Uncle Robert Elder’s and Samuel is at Mr. Zimmerman’s at the Old Mill place. They are very pious. We have no school at present. We do not keep a girl now. Ann is able to do the work and is anxious to go to see you. She says she would enjoy a visit with you very much. She would love to see Catherine. We did not know how much we thought of Catherine until she was gone from us. Elizabeth is now standing the Sabbath School in Harrisburg with her brothers. She has committed the shorter catechism and is find of preparing for Sabbath School.

Dear sister, how different is my visits now to the dwelling of my dear departed sisters. My brothers are still the same affectionate and kind, yet there appears a gloom spread all around, and the little motherless children are pleased to see me coming to see them. There is no kind sister there to welcome me with their sweet smiles or tell me some good news or mingle care with mine. My little home appears more desolate in my affliction. I have no sister here to come and sympathize and cheer the rugged path and make it pass more pleasantly along. Forbid that I should murmur. I have a consolation that my Heavenly Father does all things well and He has a right to do just as he pleases with the creatures He has made. He has prepared the way through Jesus Christ, his Son. What a sweet refuge this is in time of trial. How precious the Savior is to me through all I have to be taken from me. His goodness and justice is still the same and will be the widow stay, that trust in Him and truly I can say thy rod and staff, they comfort me.

Dear sister, it gives me great pleasure to receive a letter from your own hand and to hear of your welfare. Our nephew, S. S. Stewart could tell you how we were at that time and could inform you concerning our friends in Ohio. We were to see Sister Mary Shaw last week and found them well. Her son Samuel’s death was a severe stroke to her and Mary Ann. She says it is the hardest trial she thinks she ever met with. Brother Robert Elder’s family is well at present. Both families are getting along much better than I could have expected except Brother Joshua’s bad health which is improving very fast. I have had a letter from Brother Samuel Sherer a few days ago. They were all well. He mentioned the receipt of a letter from you which was a satisfaction to him. Ann sends her love to her Uncle, Aunt, and little cousins. Please to remember us to your brothers and sisters and enquiring friends, May the Lord send you the choicest of his blessing is the sincere prayer of your affectionate sister, — Elizabeth Elder

How many changes has taken place since you left us. I am sorry I have not got room to write but I think Ann must take up her pen and inform you how the young people and acquaintances is coming on. Dear Catherine, be diligent in duty that you may be advancing in grace. Live near to God and He will be near to you. Your Aunt, — E. E. 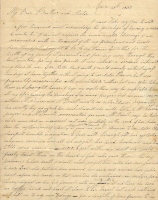