Mary may have died of complications after childbirth. She gave birth to William Frederick Lewis (1831-1891) on 2 May 1831. William served in Co. B, 2d Mississippi Cavalry (Confederate) during the Civil War.

After Mary’s death, William Lewis married Aurelia Hiley Axtell (1811-1865) of Columbus, Mississippi. William is credited with being the founder of Gainesville, Alabama. He was a successful merchant and a dealer in real estate but the Civil War destroyed his wealth.

Last evening I was very much interested whilst listening to the reading of Mr. [Daniel] Webster’s speech before the Senate,¹ which I presume you have seen long before it reached this far distant land. How exalted the motives which activate him compared with the selfishness discernible in the characters of some of his contemporaries. He seems to partake much of the spirit of the great and good Washington in seeking his country’s prosperity in devising plans and using means for her present and future welfare. Well may Massachusetts give him thanks for his able vindication in their behalf and with it all New England. It is very pleasant to read such able productions, although I may never have seen its author, but especially more as it originated from one with whom you, dear Father, are personally acquainted and residing so near the home of my parents — a home ever remembered with pleasure associated with which are the sweetest remembrances of life. Yes, dear Father and Mother, when I think of my far distant home, a pleasing sadness seems to come over me and the enquiry is suggested, shall I, O shall I again be so unspeakably privileged as to visit that dear land, so highly favored of our Heavenly Father, blessed in very many respects above this Southern region — spiritually, morally, and in opportunity for the cultivation of the mind.

April 1. Yesterday and today very windy and some cool — March-like. Frost was apprehended last night but I do not know as any was seen. A frost at this season would be of very serious consequences here. The peaches are of considerable size, corn, beans, cucumbers, squashes, potatoes, and such like are up. In this country they plant Irish potatoes in rows as you would sow peas. About this time the snow begins to melt away some and some bare ground appears with you. I have not seen a particle of snow this winter.

April 8. I was unexpectedly disappointed last week by the mail coming into and leaving Springfield before I had an opportunity of closing my letter but my feelings were not a little relieved upon the occasion having previously mentioned to you, not to put an unfavorable construction upon a failure, should one occur in receiving from us. I acknowledge with pleasure the reception of Sister Jane’s letter of last month, although it contained some intelligence from which the mind would revolt with horror; we would not think any of our fellow creatures having common humanity would be guilty of such inhuman proceedings, but thus it is and may it be wisely improved  by all to whose knowledge it may come.

Dear Grandmother, I am glad to hear you continue with my dear parents. I hope you will deem it expedient so to do, that when I return, which I expect will be in June, leaving here in May, I may have the pleasure of meeting with my dear friends again in the land of the living. O that we may with truly thankful hearts to the praise and glory of that Being who has so long watched over us for good. You will please not to write me again after the reception of this without hearing from me to the reverse as any letters would not probably reach here before we shall leave for the North. Love to all from all here.

¹ Mary is undoubtedly referring to the speech that Daniel Webster made in the Senate Chamber on 26 January 1830 — called by some as the most famous speech in Senate history. The speech is known today as his Second Reply to Hayne. 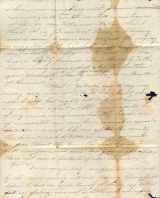