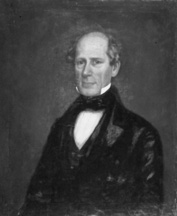 Claire wrote the letter to Abiah (Morse) Warren (1786-1841), the daughter of William and Typhenia (Whittier) Morse, and the wife of Ebenezer Tucker Warren (1779-1830). Ebenezer was the son of Ebenezer and Ann (Tucker) Warren of Foxborough, Massachusetts. He received his A.B. from Harvard in 1800, and his A.M. in 1803. He was an overseer of Bowdoin College from 1821-30. He resided in Hallowell, Maine, apparently from the time of his marriage to his death in 1830. He was a lawyer, Federal county attorney for Kennebec County, a justice of the peace, and a Massachusetts senator in 1816. He was president of the Hallowell and the Kennebec Banks for a number of years, and was a charter member of the Jerusalem Chapter of the Royal Arch Masons in Hallowell. He died suddenly in Quincy, Illinois in 1830 while inspecting soldiers’ land claims. 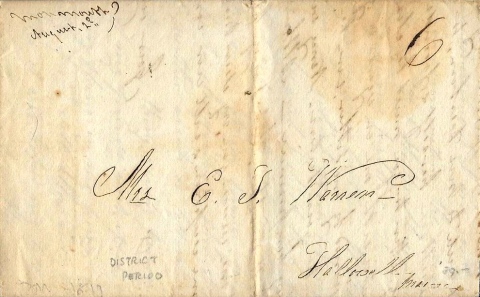 After so long a silence, will you, my dear Mrs. Warren, so far receive into favor your friend Augusta, as to give her letters a tolerably welcome reception & especially when an appeal is made to the friendship which first induced the request of a correspondence for forgiveness, and  addresses its justly angered spirit by acknowledgements & promises of future good conduct, a hope for pardon may be entertained.

When last you bade me write you, I determined I should make no more apologies necessary, altho there should be no other subject for my pen past omissions, that one should be so diffusely treated that the production should at least have the appearance of a letter in length, whatever it might otherwise want to entitle it to so honorable a name. You who know & have so long known me & my manner of spending time will not expect from my letters the intelligence or interest an other pen might communicate, or more varied scenes exist.

To one less acquainted, I should hesitate to write but knowing you to possess a good share of charity, whence for toleration is placed upon that under these circumstances my pen is entirely at your service & since I fear, however, that will not prove very adventurous to you, since you are the one alone can give pleasure in communications.

In vain may I rally all my powers of description to give you a single one of our transactions since you were here. Never did people more in the same routine of occupations with so little variation as this family of which your friend makes one. Fine for a day or two more smiling countenances here been seen since their darling object. Separation seems succeeding so well. My father, especially, appears many years younger & even from under his broad brimmed hat may be seen at a considerable distance, a face bearing evident marks of satisfaction. Something of no less importance than this, we need occasionally to come to life all engaged in it, whether interested or not.

How does your theatre flourish? I often wish to make a trip to town to attend. It is an amusement I am fond of in preference to all others. I hope travelers in enumerating the advantages of the District of Maine will not forget to say that Hallowell can boast of a theatre & add is liberally patronized by a “generous public.”

I had the pleasure of seeing your brother William on his return from New Orleans & requested him to solicit from Nancy for me the favor of an early visit. The last of this week, I shall look for her. If she does not come, shall attribute it entirely to the impossibility of leaving the magnet in Hallowell. Indeed, among my former friends seem so many devoted to their particular friends that I can obtain from them by entreaties of promises, neither visits or letters. It is that part of life in which they seem dead to everything every person but me, a period which I dread to see any more of my friends reach, if I am to suffer so much from it. Say to Nancy everything in my power shall be done to maker her time pass pleasantly if she will allow me the opportunity.

Sunday, August 1st. Before this it was hoped my letter would have reached you, leaving it Wednesday evening to finish on the morning was prevented by indisposition. Another week is commenced & my letter still unfinished but do not my dear Mrs. Warren pronounce me negligent, for necessity compelled me to be thus dilatory. Yesterday my Father informed me he thought about Thursday he should go to Hollowell. If my Mother does not accompany him, I shall, as I hope then to see Mrs. Dearborn & to have the pleasure too of calling with you, should you not have called before upon Mrs. Wingate, Nothing I more anxiously wish than see friends I so meet ____ acquainted. I know you must be pleased with Mrs. W. & her lovely daughter.

Your friend Doct. Nourse will doubtless hail their arrival with as much joy as anyone. By the way, I hope you were not discouraged from making us another by your last visit here ____ing to seem thus ______ed as we were the first time to see a stranger at our house & first appearances are so impressive upon the mind but be it so, it is now too late to retrieve — our characters.

Lest the ____ should yet permit my intended visit to Hallowell, this evening I must write to Mrs. Dearborn to welcome her thus far & ascertain when we shall see herself & friends here. The evening being somewhat advanced, my letter to you must be closed.

My Mother unites with me in regards to yourself & Mr. Warren in which we should be joined by my Father were he awake. Tender, if you please, our best love to your sisters. Nancy will receive from me a lecture for not performing her promise. Altho I have strong hopes of [paper torn] … that I may yet have the pleasure of [paper torn], let me assure you, my dear Mrs. Warren, your letter was most most welcome reception & will ever confer an obligation on

Your most affectionate, — Claire Augusta 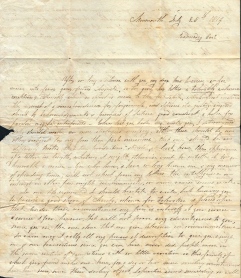 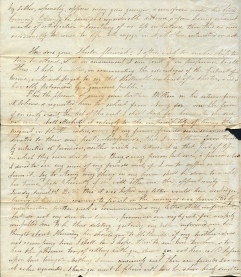 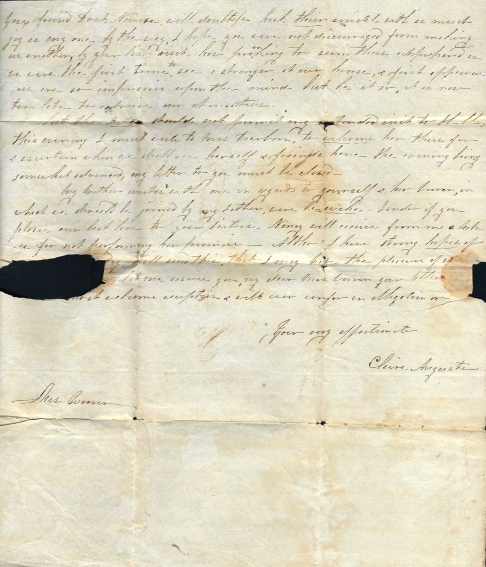