Isaac wrote this letter several years after leaving Utica with unpaid debts. While serving as the president of a glass company in Vernon, New York, he apparently issued himself company stock using investor’s funds which he converted to cash and left town. From this letter we learn that he is seeking a situation where he can practice medicine. We also learn that he has temporarily left his wife (and two children) somewhere while seeking a situation and that he is corresponding with Martha Codd (1780-1871) ² — an extremely wealthy divorcee, the daughter of Major Samuel Bradstreet, of Utica. [See biographical sketches in the footnotes]

Isaac studied medicine at Rutgers College, receiving his degree in 1815. He practiced with his brother, Ebenezer Coe, in Berkeley County, Virginia until he relocated to Indianapolis. He arrived in Indianapolis in 1821 just in time for the malaria epidemic and is credited with saving many lives (although his use of calomel/mercurous chloride, used as a purgative but best known today as an insecticide, was ridiculed by a fellow physician).

Upon moving to Indianapolis Isaac first built a home known as “the house with glass windows” on the banks of Fall Creek, later lived on the site of the When Building, then built the house seen at right, which was described as a commodious frame dwelling, located at the northeast quadrant of Monument Circle. He resided and worked here (his office is seen to the left) until removing to Galena, Illinois in 1853. Upon his death two years later his remains were returned to Indianapolis and he now rests in Crown Hill Cemetery. [Note: Dr. Coe is mentioned on numerous occasions in The Diary of Calvin Fletcher published by the Indiana Historical Society.]

Despite his use of medicines that seem shocking today, Coe was a well respected member of the medical community who served as an early chairman of the Indiana State Medical Association and was a pioneer of homoeopathy in Indiana. He was active as a founder and elder of the First Presbyterian Church and was known as the “Father of Sunday Schools” in Indianapolis. He also served as President of the Marion County Bible Society and as Treasurer of the Indiana Colonization Society in the 1830s. His biography in a state medical journal concluded “He exerted an influence for good in Indianapolis which will continue to the end of time.” Fifty years after he left Utica with unpaid debts, Dr. Coe sent funds to his creditors there to settle all his accounts. [Source: Historic Indianapolis.com] 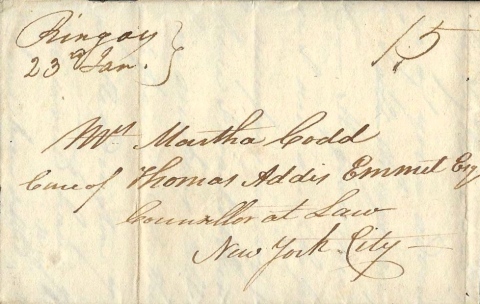 You will no doubt be surprised to hear I am still in Jersey. I was strongly solicited to remain in this place & have been here about 10 days with a view to ascertain whether it would answer or not, but am now pretty well satisfied it will not & think I shall leave it next week for Virginia. In the meantime it will give me much pleasure to hear from you.

I was in New York [City] and called on Mr. Emmet in December. He told me you was in Albany and being in for some sengual instrument for the count of which a patient was suffering, I had not time to find the children who I understood were in Spring Street, which I much regretted.

I left Mrs. Coe 4 weeks since & have not heard from her. She does not expect to see me until next spring.

I believe I shall take the City Washington on my route & when I arrive there may perhaps go further south than I intended should I hear of a good vacancy. I have forgot where Rev’d Daniel Smith resides. Will you inform me? Recollect that we have not yet had the history of your trip across the Atlantic & if time will permit, give me some of your adventures & let me know how things are progressing in the suits, &c. It gives me much pleasure to tell you I am amply provided with the funds necessary for my journey having from the time I waited been much more successful in making collections than I had reason to fear.

Brother E. is in good practice at Readington — 7 miles from this place. It would have given me much pleasure to have been settled near him but it does not now appear consistent with the great object I had in view in studying Physic Viz: to settle all those demands which altho legally discharged are conscientiously binding.

Give my love to Mr. Bradstreet, Mr. Emmet & family, and your dear children. The Lord be with you and yours.

¹ Biographical Sketch of Isaac Coe from The Pioneers of Utica (1877): “In July, 1804, that long established merchant Ezekiel Clark took into partnership Isaac Coe. In September of the following year they dissolved, and Mr. Coe went on alone. He [Coe] soon removed to a store on the west side of Genesee just above where is now Broad street. The same month, October 1805, he married Rebecca Cook of Canandaigua, and took up his residence in a house on the site of the Bradish block, a house that was noticeable from its having stairs on the outside, leading up to the parlors on the second floor. He was made village treasurer at the first election held under the charter of 1805, and continued in the office, by annual reelections, as long as he remained in Utica. Possessed of decided enterprise, an active mover in the project for establishing a glass factory at Vernon, and the largest subscriber to the stock of the company, he was, if not the first, at least one of its earliest presidents. But his ambition outran his resources, and his career ended like that of many another; he failed and went west. In September, 1810, a new treasurer was appointed “in lieu of Isaac Coe, who has left the place.”

The next year there appeared a card in the village papers from the secretary of the glass company which would seem to cast a shade upon the memory of its late president. It contained a resolution of the directors in which they declared that “Whereas Isaac Coe, late president of said company, issued to himself, under the seal of the company, thirty-eight shares on which the requisite payment of sixty dollars per share had not been paid, they will not transfer said shares to any person until the whole of the arrearages are paid.” Without further knowledge of the facts in the case, we read this card with a certain degree of distrust of the absconding one. We couple it with the resolution of the village authorities, passed the previous year, wherein at the same time that they create a new treasurer to succeed Mr. Coe, they make a peremptory call upon the latter for the books and papers in his possession. From the two acts thus read in connection we are led to presume that his straitened means had tempted him to speculate upon funds entrusted to his keeping, or at least, that he had gone off in such haste as to neglect to place himself aright with respect both to the glass company and the board of trustees. Yet it would scarcely be proper to betray such suspicions — and which are but suspicions — were there not a sequel to the story. Fortunately there is a later chapter in the life of the seeming defaulter. And this reveals an honesty of purpose and a regard for his honor that should be recorded to his credit, and cause his name to live in our local history like that of the honorable merchant, Mr. Denham, whom, for a similar reason, Dr. Franklin has embalmed in his delightful Autobiography.

Upwards of fifty years after the abrupt departure of Mr. Coe, and when nearly “all who had once known him had gone down to their graves, he reappears on the scene of his youthful experience to make good his delinquencies. Calling upon the son of one of his former creditors, he deposits with him the means with which to pay with interest his old indebtedness, and a similar sum for the discharge of all that he owed to another and now needy creditor. Other men have made restitution after years of pecuniary indebtedness; not many have carried a burdened conscience for fifty years, without the power to absolve themselves, and yet have lightened it at the last.”

² Biographical Sketch of Martha (Bradstreet) Codd from The Pioneers of Utica (1877): “A much more notorious member of this same proprietary family, was Martha, daughter of Major Samuel Bradstreet, of the 40th Regiment of English Infantry, who was stepson of General John Bradstreet. She was born on the island of Antigua, W. I, August 10th, 1780, and married in Ireland to Matthew Codd, April 16th, 1799. They came to America in the fall of the same year, and not long after were living in Utica.

Their first residence was on Whitesboro street, a little distance west of Broadway, and their subsequent one was on Main street, next Talcott Camp. If strong enough to be the support and defender of his wife, for he was over six feet in height and proportionately vigorous, Codd was worthless enough to be her continual plague. Without employment, he lived only on the drafts she received from her friends abroad, and was besides intemperate and quarrelsome, driving her frequently from the house. More than once did she flee into Squire Camp’s for protection, and there from a window carry on an altercation with her husband, as he stood on the stoop of his own dwelling. His conduct was so bad that they separated, and were eventually divorced. She subsequently obtained an act from the Legislature authorizing her to assume her maiden name. Codd left this part of the country. His wife was here or in the vicinity in 1809, and lived afterward successively in Albany, New York, &c., and a short time, in her later life, in the western part of this city [Utica].

After her divorce from Mr. Codd, she became notorious as a strenuous and persevering claimant of a large part of the soil of Utica. She harassed numbers of its citizens with suits at law, and besieged the courts with her causes. These trials are fully reported in the Law Reports, so that it will hardly be worth the while to present here anything more than the barest outline of the points at issue.” 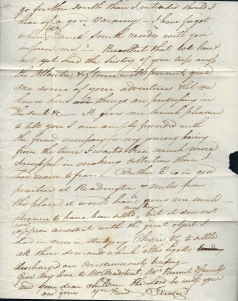